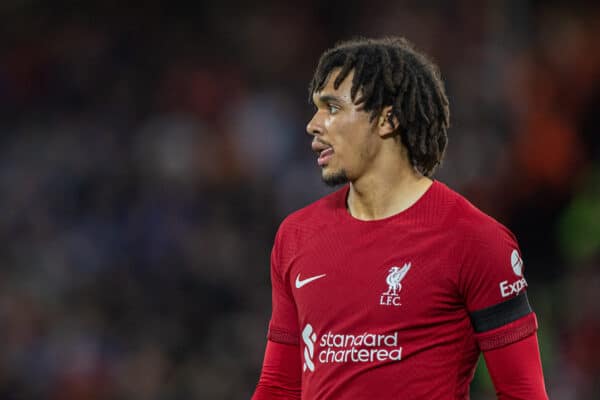 Trent Alexander-Arnold delivered an emphatic response to recent criticism of his form with a stunning free-kick in Liverpool’s 2-0 win over Rangers.

It took the right-back just seven minutes to find the back of the net on a night where many were calling for Joe Gomez to take his place in the side.

An arrowed free-kick into the top corner set Liverpool on their way to a comfortable win over their Scottish opponents, leapfrogging Ajax into second in their Champions League group.

Alexander-Arnold was given a standing ovation when he was replaced in the closing stages at Anfield, and speaking to BT Sport after the game, he insisted the criticism did not affect him.

“No matter what, I always try and think positively,” he said.

“People say things, but for me, it’s about going out there and performing for the team.

“That’s the only thing that matters, coming out here, getting the wins and helping the team win games.

“It’s been a slow start to the season for me, but I’m looking forward to the rest of the season.”

It can certainly be argued that a change in system, from Jurgen Klopp‘s long-standing 4-3-3 to a setup closer to a 4-2-3-1, helped Alexander-Arnold in his defensive play.

The No. 66 was stationed more like a traditional right-back, with Jordan Henderson and Thiago shielding the back four as a two-man midfield, and it gave him the platform to express himself.

It would be no surprise to see Klopp retain his new shape for the trip to Arsenal on Sunday, and Alexander-Arnold would be happy if that was the case.

“We shifted across the pitch really well, made it compact, they couldn’t play through us, they were playing a lot of long balls and we were picking up the second balls.

“The change of tactic definitely helped us today, so we’ll see what happens going forward.”