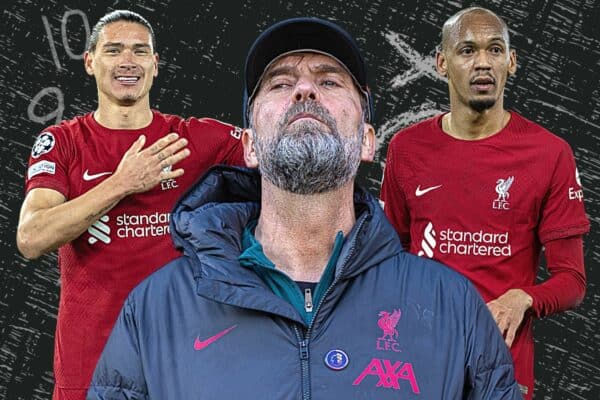 Liverpool’s encouraging 2-0 victory over Napoli came as Jurgen Klopp changed his side’s formation for the third time in the space of four matches.

For the vast majority of his time at Liverpool, Klopp has deployed a 4-3-3 system with great success, a set up that has given his side a good balance at both ends of the pitch.

The Reds’ struggles this season saw the boss move away from his tried and trusted formation last month, with his hand forced by injuries to some of his key attacking players.

But in Tuesday’s win over Luciano Spalletti’s side, Klopp admitted he had gone “back to basics” with the set up of his team, in a shape that offered Liverpool improved solidity and defensive cohesion.

Here, we take a look at the three different formations Liverpool have used in recent weeks, and how the Reds are likely to approach their final three matches before the mid-season break for the World Cup.

Liverpool first switched to what the players and manager have called a 4-4-2 system following their chaotic 3-3 draw with Brighton at the start of October.

The immediate results were largely positive, with four wins from five, including a 7-1 thrashing of Rangers and a 1-0 victory over Man City.

But the injury sustained by Diogo Jota in the dying embers of the latter game would go on to give Klopp something of a dilemma in the coming weeks. Without Jota and Luis Diaz, who is also sidelined until after the World Cup, Liverpool are without their two main options to play on the left side of the attack in that system.

The next game was a 1-0 win at home to West Ham, with Darwin Nunez excelling up top, but without him, Jota and Diaz against Nottingham Forest, Liverpool barely created any chances from open play, despite several golden opportunities from set pieces.

Klopp referred to this system as a 4-4-2, but the average positions of the players in all of the matches where they used this formation showed it had more of a 4-2-3-1 look to it, with Roberto Firmino just behind the striker, whether that may be Salah or Nunez.

With three key forwards out against Forest, as well as the late withdrawal of Thiago, and an unfamiliar deeper role for the returning Curtis Jones, Liverpool struggled to create going forwards, and also found themselves too vulnerable to counter-attacks.

A disappointing performance and result at the City Ground, and the return of Nunez, saw Klopp opt to change his system in their next match.

Switch to diamond for Ajax & Leeds

When the Reds travelled to Amsterdam to take on Ajax four days later, Klopp decided that the best way to utilise Firmino, Salah and Nunez would be in a diamond formation.

Salah and Nunez were both deployed more centrally, with Firmino just behind, in a role that wasn’t too different to the false nine position he has become accustomed to playing under Klopp.

The Liverpool manager made clear that he did not want Nunez to be positioned on the left side of the attack, believing this system would allow all three of his attackers to play in roles they were comfortable in.

Against Ajax, it was a move that paid off, with Salah and Nunez both on the scoresheet, and Liverpool keeping a clean sheet, as they cruised to a 2-0 victory over Alfred Schreuder’s side.

The following weekend, Klopp opted for the same shape, with the same front three, but this time, the Reds encountered serious problems, falling to their first home defeat of the season.

Jesse Marsch’s Leeds side, who were 19th in the league table going into this game, were able to cut through Liverpool’s midfield at will.

One thing to note from the average positions from the two games is the gap between Liverpool’s No.9, Firmino, and their No.3, Fabinho.

With Liverpool’s two No. 8’s tasked with covering the wider areas of the pitch more often, Firmino and Fabinho did a good job of covering the central areas against Ajax, but struggled to do so with the same efficiency against Leeds.

Where, then, would Klopp go from here?

Back to basics vs. Napoli

Having just come off the back of defeats to the two teams at the bottom of the Premier League, the Reds’ Champions League tie with Napoli, Europe’s in form team, had all the hallmarks of a game that would cause Klopp’s side more big problems.

Before the game, the teamsheet didn’t exactly inspire supporters, either, with James Milner and Curtis Jones coming into the midfield and attack.

Klopp revealed before the game that the idea would be to set up in a 4-3-3 system, with Jones on the left of the front three, Salah on the opposite flank and Firmino through the middle.

The performance, though, was a much more solid one than many were expecting. For most of this season, Liverpool have found themselves far too open when deploying a three-man midfield, but in this game, they did a much better job at closing those gaps, as Klopp explained at full-time.

“Being compact makes all the difference,” he told BT Sport.

“All of a sudden we have challenges in the right places and we are difficult to play against. If you see what Napoli is able to do at the moment, it was a really good game from us, in our situation, in our moment, with a few issues.”

The inclusion of Ibrahima Konate at centre-back undoubtedly made a difference, while Klopp also highlighted Jones’ good work at both ends of the pitch.

In the second half, Nunez replaced Jones, and it was his cameo that led the Reds to victory. Liverpool aren’t blessed with too many options for the left side of the attack, but both Jones and Nunez proved they’re more than capable in this position, while in his post-match press conference, Klopp also name-checked Fabio Carvalho and Alex Oxlade-Chamberlain as two players that can fill that specific role.

Diaz is expected to return from injury before the end of the year, and while Jota’s recovery may take longer, Klopp himself has implied that his team could have a different look to it after the World Cup.

In the meantime, though, given the improved cohesion against Napoli, it’s hard to see past Klopp sticking with the same formation against Tottenham this weekend.

Should Konate be fit to play again, you would expect him to start alongside Virgil van Dijk again in defence, with Andy Robertson coming back in for Kostas Tsimikas at left-back.

If Jordan Henderson returns from the knock that kept him out against Napoli, we’re probably likely to see the Fabinho, Henderson and Thiago midfield that worked so well together last season, but has struggled to operate at the same high levels this term.

Nunez may well be set for a place on the left side of the front three, alongside Firmino and Salah up top.

If the Reds perform well again in a 4-3-3 system against Tottenham and Southampton before the break, there’s every chance that will be the shape Klopp prepares to use in the second half of the season.

Klopp is hoping that by temporarily moving away from it in the last month, his squad have regained their defensive impetus in this formation.

“It’s always on the table for us, it doesn’t mean we will play it from now all the time.

Referring to Nunez’s role on the left, the boss said: “Offensively it’s obviously not a problem [him playing there], there’s no difference to a diamond really, but defensively there’s a big difference. We have to figure out what’s best for us depending on which players are playing.

“We will see what we do against Tottenham, this system was never off the table. We had to change a little bit and give ourselves an impulse and feel the defending stuff again in a new way.”