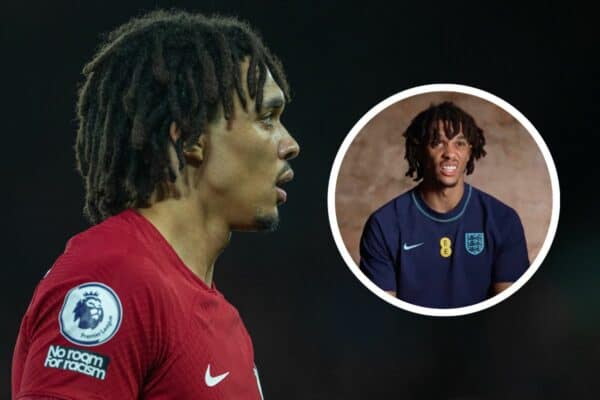 Gareth Southgate’s use of Trent Alexander-Arnold has been a hot topic going into this year’s World Cup, with the Liverpool right-back now responding to those who have criticised him for his form this season.

Alexander-Arnold has been included in England’s 26-man squad for the tournament, but may have found it harder to make the cut had Chelsea‘s Reece James had been fit.

With Liverpool struggling to gain any kind of consistency so far this season, the 24-year-old has been singled out for his defensive performances in recent months.

Now, Alexander-Arnold has responded to suggestions that he has not defended well enough.

“I would say there’s been a lot of spotlight on it. There’s been a massive magnifying glass on that aspect of my game,” he told ITV Sport when asked how well he had defended so far this season.

“Obviously, like any part of my game, there’s improvements to be made, there’s decisions that I could have made better, there’s instances where I could have defended a lot better.

“But, at the same time, there’s been instances where I’ve defended really well. That’s the way that the game is.

“I think a lot of people like to shout about the mistakes and the ones that I could have done better on, rather than the ones that I’ve defended well on, and that’s just the way it is.

“You defend three well and one bad, they have a big chance, and there it is, I’ve had ‘a bad defensive game’.”

During the last international break, Liverpool’s No. 66 was left out of England’s matchday squad for their friendly with Germany at Wembley. After the game, Southgate explained his decision by claiming he felt Kieran Trippier’s all-round game was “ahead” of Alexander-Arnold’s.

To date, he has racked up 17 England caps, having first been called up to the squad for the 2018 World Cup in Russia. Since then, he has struggled for opportunities, and is not expected to be a starter to the Three Lions in Qatar.

Ahead of England’s opener against Iran, Alexander-Arnold was also asked to assess his performances for England so far.

“Not the best football I’ve ever played, probably not the worst either,” he continued.

“Just somewhere in the middle that is not amazing, but not the worst, really. It could be a lot better.”

Alexander-Arnold’s typically level-headed answer makes you wonder why there has been so much talk around his performances at international level.

He went on to explain how he hopes his form will improve with more opportunities.

“No, definitely not, no,” he continued when asked whether he was yet to perform to the levels “he’d expect” for England.

“But when you think about it, I think it’s been 17 or 18 games now and I think, in the grand scheme of things, that’s half a season, if you’re going to put it in that sense.

“Players have average half of seasons. Hopefully the second half of the season will be a lot better for me.”

Given the way some supporters and pundits talk about Alexander-Arnold, you would think he was one of their worst players.

It’s easy to forget how young he still is. By the age of 23, he had won every single club trophy available to him. Not bad for such a “poor defender!”

No matter how often he features in Qatar, Liverpool and Jurgen Klopp know they have a prestigious talent on their hands.