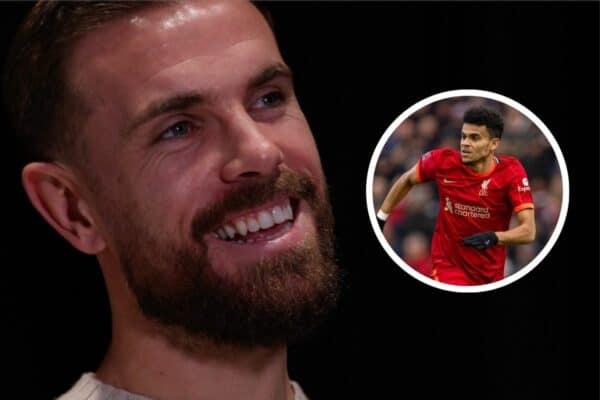 Luis Diaz made an instant impression when he signed for the Reds in January and it wasn’t just supporters who were taken by the Colombian, as Jordan Henderson explains.

Speaking exclusively to This Is Anfield, the Liverpool captain was effusive in his praise for Diaz, highlighting the winger as an example of a player who impressed immediately when signing for the club.

Diaz arrived from Porto for an initial £37 million – a fee that could rise to £49 million – and quickly took to life in a Liverpool shirt, scoring six goals and putting on four assists in his first half-season with the club.

Those goals added to the 14 he’d already scored and 11 he’d assisted for Porto in Liga Portugal. Impressive numbers for a winger, who ended the season as the seventh-top-scorer in Portugal.

Henderson has been at Liverpool for 11 years and has seen a lot of players arrive at first-team training, whether it be a new signing or a youth player making the step up.

We asked the Reds’ captain who had impressed him immediately and taken him by surprise.

“There will be a lot of them over the time that I’ve been here,” he said, before going on to explain Diaz’s impact.

“The most recent one I can give you because it’s most fresh in my mind is Luis Diaz.

“How he adapted so quickly to how we wanted to play, the speed of the Premier League, everything like that that a lot of people speak about normally when new signings come from abroad.

“[He] really impressed us, straight away in the first session that I seen him in training.”

In 11 years at Melwood and the new AXA Training Centre, Henderson has seen it all. So what does it take to make it at Liverpool Football Club?

The skipper has two key qualities he thinks are vital: “Hard work. Self-belief.

“Them two things will put you in pretty good stead to succeed at Liverpool.

“Yes, the fans want to be successful and they want to win, every player does as well, but they also appreciate when they can see a player giving absolutely everything.

“And you don’t come to Liverpool if you don’t have quality. When you’re signing, the quality is obviously there from what you’ve done, but when you get here I think the biggest thing is how much you’re willing to sacrifice for the club and the team.

“And if the answer is everything, then you’ve got a good chance of being successful and having a successful career at Liverpool.”

This is an extract from our exclusive interview with Hendo, which will be released later this month.

* Jordan Henderson: The Autobiography is available now. Click here to order your copy.