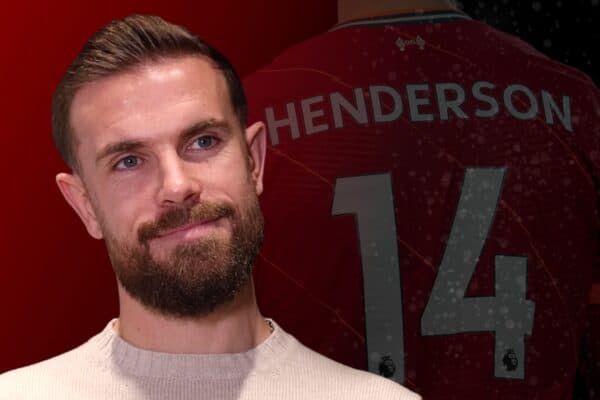 In full: This Is Anfield’s exclusive interview with Jordan Henderson

Jordan Henderson has made history as Liverpool captain, and on the release of his book ‘Jordan Henderson: The Autobiography’, we sat down with the skipper for an exclusive chat.

Thanks for speaking with us Jordan, we know it’s arguably the busiest time for any footballer in the history of football…

Yeah, it’s quite busy, with all the games coming up but it is what it is.

We always give our best no matter how many games we play, but yeah, it’s pretty hectic at the minute.

With your book, did the journey of writing it make you think differently about anything that has happened in your career?

I think there were certain things looking back and it sort of makes you more self-aware by the end of it, I think.

In terms of how you think about certain things, certain situations and you look back you think, ‘was I really thinking that much and that bothered by that, something so small’.

But at the time it was so big to us. It made us more self-aware, definitely.

It’s been a rollercoaster 11 years at LFC for you, but being the only captain to lift 6 different trophies must feel pretty incredible?

Yeah, really lucky and fortunate to have been able to do that and being at this club for that long as well.

It has been a bit of a rollercoaster but I’ve loved every minute of it. There’s been really tough moments but, again, it makes the things you do win even sweeter, really.

To go through the tough moments as a team and an individual to then get over that and to win things makes it even better.

It’s been an incredible journey so far, and hopefully, there’s still a long way to go yet.

You’re a player and person who grasps what it means to play for this club and supporters, how important is that for you and other players?

I think that’s part of the fabric of playing for Liverpool, the history.

I can remember the manager speaking about it when he first came in and how that could be a burden, and how successful the club was years ago.

But, actually, it should be an inspiration and sort of flipped it and tried to use it in a different way. I think that really did help us and the mentality.

But I think it’s ingrained in the football club and respected, and gaining inspiration from the players that played here before, the trophies they won, what they did as a team – definitely.

I just hope that in years to come it will always be the case. I’ve been so fortunate to play with amazing players, incredible managers as well and that’s really helped me in my journey.

You do a lot of brilliant community work off the field, why is it important to you?

I think that’s important to me, always, just because of the values I had when I was brought up.

I think I mention quite a bit in the book, about the values of being brought up in Sunderland, [with a] working-class background.

A city that really loves football, can’t wait until the weekend to go, work all week, Monday to Friday and they can’t wait for the game on the Saturday to go and support the team.

I’ve always tried to keep them values and try to give back as much as possible. Obviously, where I’m from in Sunderland, yes, that’s important to us but also Liverpool because I’ve lived here for so long, they’ve given me so much. My kids were born here, it’s their home.

I see Liverpool actually as my home now, but obviously never forgetting where I was brought up in Sunderland.

If you could go back and relive any Liverpool match from the stands, which one would it be?

Wow, to watch a match back?

Oof, I think I’d go Champions League final, maybe the game wasn’t great in terms of a spectacle, but the end goal, everything that we’ve been through as a team, to get to that point and then watch the team lift the trophy, I think would be incredible.

I’d go with that but in terms of an actual game, I would probably go Barcelona at Anfield.

The atmosphere, everything around it, where we were at that moment in time in the league, also in the result of the fixture from the first leg.

So as an actual game, I’d probably choose that one.

A mad stat for you, did you know the 2019 CL final XI only ever started that game together?

What, in that final? You’re joking, wow. What a stat that is!

So they never played together before or after?

You’ve won one CL and PL, but this Liverpool team would’ve dominated in the ’90s and ’00s, wouldn’t they?

Maybe. But would that have been as good?

I think that goes with everything in life. So without that, I’m not sure it would feel the same, actually.

Again, I go back to that Champions League moment probably being the biggest moment of my career but I’m pretty sure the lads, or a lot of the lads, would say the same because of everything that we’d been through before that as a team.

I’d never want to change that so let’s not even go there.

It was your idea to lift the Premier League in the Kop, how did that come about?

I think I might have had a conversation with a few players.

I just felt there was no better way than doing it in the Kop, with all the history and everything with the banners behind the podium.

I thought that was the best out of a bad situation we could do.

What does it take to make it Liverpool FC?

Hard work, self-belief. I think them two things will put you in pretty good stead to succeed at Liverpool.

Yes, the fans want to be successful and they want to win, every player does as well, but they also appreciate when they can see a player giving absolutely everything.

You don’t come to Liverpool if you don’t have quality.

When you’re signing, the quality is obviously there from what you’ve done, but when you get here I think the biggest thing is how much you’re willing to sacrifice for the club and for the team.

And if the answer is everything, then you’ve got a good chance of being successful and having a successful career at Liverpool.

So which young player or new signing immediately surprised you, then?

There will be a lot of them over the time that I’ve been here.

The most recent one I can give you because it’s most fresh in my mind is Luis Diaz.

How he adapted so quickly to the way we wanted to play, the speed of the Premier League, everything like that that a lot of people speak about normally when new signings come from abroad.

[He] really impressed us, straight away in the first session that I seen him in training.

In your book you discuss your harder times – almost being sold to Fulham, missing out on the title under Rodgers – was there a time you thought it wasn’t going to happen, or your belief changed?

I think there will have been definitely, in them moments, that stuff like that happened, when we lose a title or a final.

And certainly, there’ll be moments I’ll be overthinking and thinking a lot about different things, like ‘why can’t we end up getting over the line, just in one’?, ‘when are we going to get the opportunity again?’, ‘will we ever be able to get back?’

But when you have a little bit of time to reflect and think about things and go away, I think that then gives you even more fire to want to get back there again and put it right.

That’s been a huge factor in the way that we’ve ended up being successful in a period of time.

And now at the minute, yes, we’re going through a bit of a rough patch as well and you’ve got to do it all again.

You know, football is never easy, it’s never plain sailing. You’re going to have ups and downs along the way and you’ve got to try and deal with both of them as best you can.

* Jordan Henderson: The Autobiography is available now. Click here to order your copy.