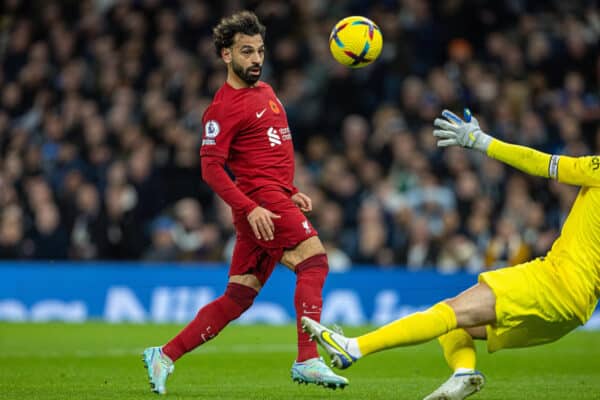 Jurgen Klopp believes Mo Salah will be looked back on as “one of the best strikers ever,” but highlighted another quality in Liverpool’s 2-1 win at Spurs.

Salah struck twice to seal a vital victory away to Tottenham on Sunday night, taking his season’s goal tally to 14 and his overall record for the club to 170 in 274 games.

The Egyptian has moved to within two of Kenny Dalglish‘s output for Liverpool, the legendary Scot currently sitting seventh in the all-time goalscoring charts, having struck 172 times in 515 games.

And with two more seasons on his contract beyond the current campaign, Salah stands to fire himself at least into the top five, with Klopp of the belief he is “one of the best” in history.

However, in his post-match press conference on Sunday, the manager praised his No. 11 as a “real team player” who showed “outstanding attitude” in defending Liverpool’s lead.

“Mo, even in the slow start [to the season], was involved in the most chances in Europe,” Klopp explained.

“But, how everybody knows, in the end, when you look back on his career in four, five, six years, everybody will remember one of the best strikers you ever saw, because the numbers will be absolutely insane.

“But tonight, what pleased me the most was he scored the two goals then he played like a real, real team player.

“I’m not surprised about it, but it’s just important, because he gets confronted with these questions as well.

“Slow start, these kinds of things, and then it’s like you have to score a hat-trick here or whatever.

“But it was all about first defending and then you will get your chances again.

“We were in these moments. I think he had a pretty big one [to make it a hat-trick] which he takes with one touch, if he takes with two touches he was completely free, I think he could have finished it off there.

“So, really pleased for him, top performance and showed outstanding attitude tonight.”