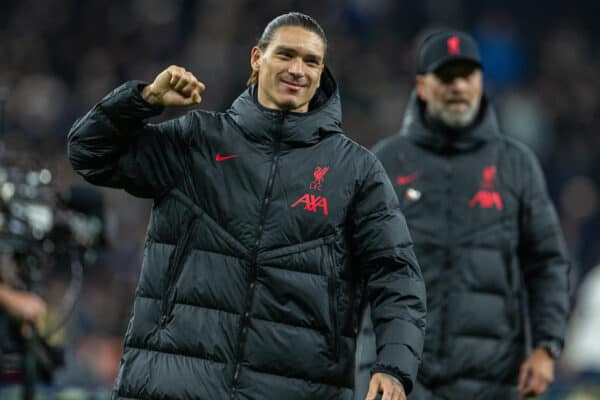 Jurgen Klopp has praised Darwin Nunez as a “massive threat” from the left wing, but admits the win at Tottenham showed “space of improvement.”

With Klopp reverting to his 4-3-3 formation in the past two games, the manager has utilised Nunez in a new role on the left flank against Napoli and Tottenham.

Sunday brought his first start out wide for Liverpool, and the 23-year-old was the main outlet as his side took a 2-0 lead, setting up the opener for Mohamed Salah.

But as Spurs fought back into the game and grabbed one back through Harry Kane, it was clear that Nunez’s flank was being exposed by Eric Dier and substitute Dejan Kulusevski.

And speaking to Sky Sports after the game, which ended in a 2-1 victory, Klopp assessed the positives and negatives of using his No. 27 as a winger.

“It’s a great pass, Kulusevski comes on and bing-bong, there we go,” he said of Spurs’ goal.

“On top of that, it’s super-intense for him to go there all the time and these kinds of things.

“But there’s only one moment too late and Dier steps in, or whoever was on that wing, and the next ball is in the box. That’s really tricky.”

It was not only Nunez who drew attention for his efforts both on and off the ball, with Trent Alexander-Arnold attracting criticism following his battle with Ryan Sessegnon.

During Sky Sports’ analysis of the game, Gary Neville doubted whether England manager Gareth Southgate would take the Liverpool right-back to the World Cup as he “does rash things.”

But in his post-match interview, Klopp defended Alexander-Arnold, praising his creativity against Spurs and insisting that it was “tricky” to defend against them.

“His diagonals are from a different planet, I would say. That’s unbelievable,” he said.

“We obviously could have done even more with these balls than we did.

“But it’s really difficult, with the four in the back, to defend [against Spurs]. It’s only possible with support.

?? “His diagonals are from a different planet.”

“So there’s a lot to consider as a defender.

“There’s only one chance, because you have to move to the ball side as well, because they might pass the ball through and the next moment it’s a long one.

“So you have a 10-metre run-up, then you have a one-on-one challenge in a pretty big space. You only hope that the midfield is helping.

“I thought he had a really good game, but it’s tricky for the full-back.”