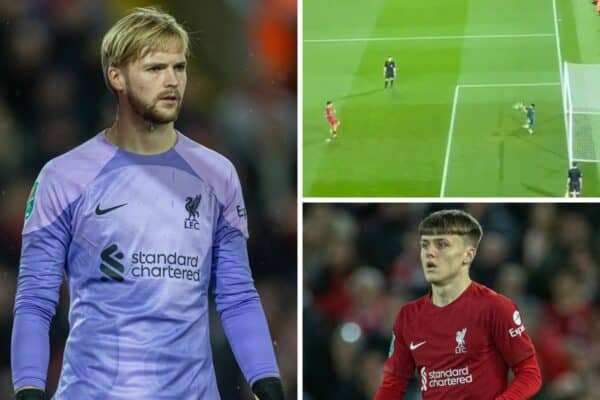 Caoimhin Kelleher was Liverpool’s hero once again as Liverpool beat Derby on penalties in the Carabao Cup on Wednesday, but the less said about the positioning off the Derby goalkeeper, the better!

Liverpool had their fair share of success in shootouts last season and Kelleher ensured they began this campaign in the same fashion with three terrific penalty saves to help the Reds over the line at Anfield.

Talking of the line, Derby goalkeeper Joe Wildsmith seemed to forget the basic rules of being in goal for a spot kick, and was basically outside his six-yard box to save Stefan Bajcetic‘s first penalty – something the linesman failed to do his job and order a re-take.

Supporters were encouraged by the performances of a number of Liverpool’s youngsters, in what was eventually a successful night at Anfield.

Here are four things fans are discussing after the Reds progressed to the fourth round.

Why do teams even bother with penalty shootouts when Kelleher is in goal?

His three excellent saves last night brought up an unbelievable record, with the Irishman now winning more shootouts (4) than any other goalkeeper in Liverpool’s history, in just his 18th appearance.

It’s also emerged that Kelleher changed the gloves he was wearing before the spot kicks were taken. Whatever you do, Caoimhin, keep that pair of gloves!

?? Pens shall not pass. pic.twitter.com/fEYvwVOSW3

Kelleher would have saved Titanic

"We have the best number 2 in the world."

Not sure about the Derby ‘keeper’s positioning, though!

Some save from the six yard line that ? pic.twitter.com/lvxT6qwBH2

How on earth was this allowed to happen more than once, and more to the point, why did the referee and his assistant not do anything about it?!

When Bajcetic missed Liverpool’s first penalty, Derby goalkeeper Joe Wildsmith was miles out of his goal.

It was much the same when Roberto Firmino skied his effort, and if it wasn’t for Kelleher’s heroics and Liverpool were beaten, there really would have been an inquest into why Wildsmith wasn’t punished.

Go on Caoimhin!!!!!!!!! Superb again. Derby keeper 2 yards off his line everytime, warned about it, yet nothing done about it. Haha. We move on

Ben Doak is how old?

Liverpool really do look like they’ve unearthed another gem in Ben Doak, don’t they?

A scarily good cameo, especially when you consider he’s young enough to be James Milner‘s son!

Ben Doak’s parents are the same age as James Milner.

“Ramsay’s just got it”

He’s waited a long, long time for his Liverpool debut, but Calvin Ramsay certainly impressed at Anfield on Wednesday.

There’s every chance Ramsay and Doak could be Scotland’s right-hand side for years to come!

1??0??5?? – Calvin Ramsay completed the most passes for #LFC against Derby County tonight.

Seemed capable of dictating the play from right-back. Looked very comfortable for a player who was only making his first start for the club.

Calvin Ramsay is just so comfortable on the ball. A defender with the ball control of a central midfielder. Left and right foot, the lad can play.

Ramsay’s just got it, hasn’t he? Only takes one game to see it with some players.