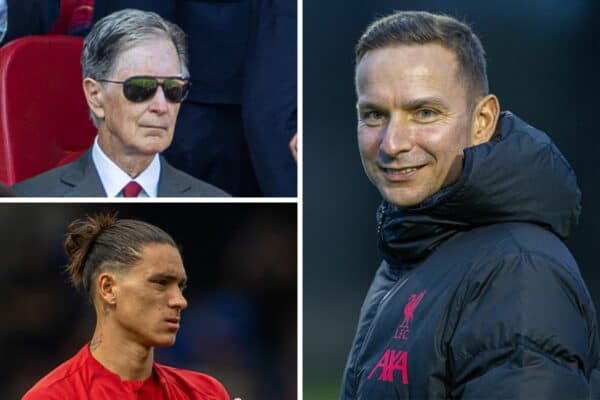 Liverpool’s transfer business under the ownership of Fenway Sports Group is always a big talking point among supporters, with assistant manager Pep Lijnders jumping to the defence of the owners’ recent player recruitment.

With FSG at the helm, Liverpool have not had the financial resources of some of their rivals, but have still managed to be successful under the guidance of Jurgen Klopp.

Now, with reports suggesting that FSG are looking to sell the club, some supporters have expressed excitement at the prospect of Klopp being backed with more funds in the transfer market.

Lijnders, though, believes the club has “invested well” under the current ownership, citing the likes of Luis Diaz and Darwin Nunez as examples, while going on to explain why the club have had to “hit the bullseye” with their transfers.

“I think if you look to our last years, bringing Luis Diaz in the winter was a massive signing – and needed, I said it was like water in the desert, to give this last push.

“Then you have Calvin, you have Fabio, young players who come in as signings. Then before that, Ibou Konate, Jota. These are all signings who hit the bullseye.

“And with time, what was most important was to tie down our best players, because our team is and was a machine. If you don’t tie them down, they will leave.

“So what I’m trying to say is there is always a balance. You need to be right with your signings and I believe we were right.”

Lijnders, who was on pre-match media duties ahead of the Reds’ League Cup clash with Derby on Wednesday, accepts that some supporters want to see Liverpool be more active in the transfer market.

But he is clearly a strong believer that the club have been clever in the market considering the resources at their disposal, citing Klopp’s extended contract at the club as another example of how FSG have brought success to the club.

“Do people want to see one or two or three or four more players? Yes, of course,” the Dutchman continued.

“Add and add, renew and renew the team, and to make it younger and younger, to add academy and academy, to give talent a chance – and to buy the top one who immediately influences the first XI, like Luis, like Jota, like Ibou, like Kostas.

“I think we invested. What people want to see is that transfers are the one thing, but building a club and building a long-term, successful relationship has much more to do than just the transfers. Otherwise, we are not sitting here. So, tying down Jurgen Klopp for seven-plus is maybe even more important.”