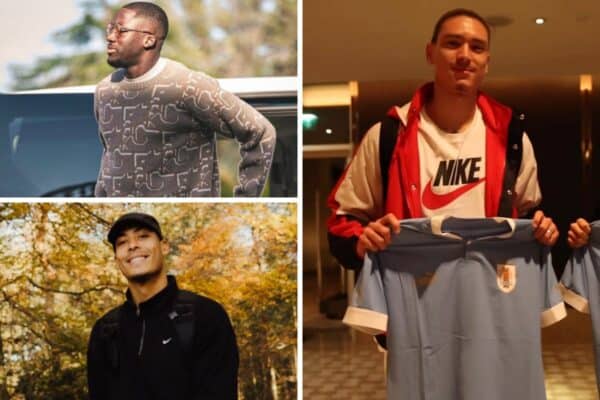 The seven Liverpool players who will feature at the World Cup have linked up with their national teams in the last 48 hours, with the tournament due to get started this Sunday.

And footage has emerged of Liverpool’s players joining up with their nations in recent days, with some already making their way to the middle east.

Nunez was pictured joining up with the Uruguay camp in Abu Dhabi on Sunday evening, just one day after his brace against Southampton in Liverpool’s final match before the tournament.

It’s been confirmed that Nunez will wear the No. 11 shirt for his country in Qatar, in a squad that consists of the likes of Luis Suarez, Edinson Cavani and Real Madrid midfielder Federico Valverde among others.

Elsewhere, Konate reported as normal to France’s training base in Clairefontaine on Monday, despite missing the victory over Southampton with a minor injury.

The Liverpool defender was also pictured training with the rest of his France team-mates on Monday evening, allaying fears that the problem was anything serious, with one clip showing him refusing to let Barcelona’s Ousmane Dembele dribble past him. Ibou at his best!

Presnel Kimpembe, the PSG centre-back who featured heavily for France in their 2018 World Cup triumph, has pulled out of the tournament due to injury, which may increase Konate’s chances of a starting spot in Didier Deschamps’ side.

Netherlands captain Van Dijk was another who was pictured arriving at their training base on Monday, and also took part in a training session on Monday evening.

England duo Alexander-Arnold and Henderson arrived at England’s St. George’s training base on Monday, with Gareth Southgate’s side departing for Qatar on Tuesday.

Brazil’s World Cup squad are preparing for the tournament at Juventus’ training base in Turin, with Alisson pictured arriving there on Monday.

Those who haven’t yet departed for Qatar will do so in the coming days, with all of Liverpool’s players to begin their group stage campaigns next week.