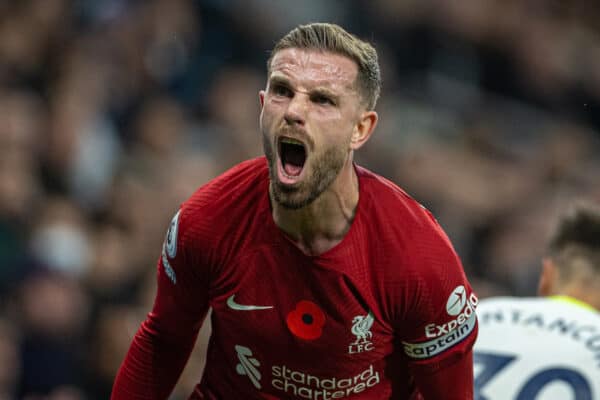 Liverpool thrive in chasing down the pretenders – but what about the rest?

Liverpool picked up a crucial win at Spurs as they seek to chase down those above them, but victory over Southampton next weekend could be more impactful.

Three valuable points gained in north London, during what was our first win on the road in the Premier League this season.

In a time of increasing domestic need, Liverpool can usually count upon the gifts that Tottenham are likely to come bearing.

Should Liverpool’s troubled 2022/23 league campaign work its way to a relatively positive conclusion compared to their recent mid-table water-treading standards, then Sunday’s victory will be looked back fondly on as one of the crucial building blocks.

A game in which a loss would have left Jurgen Klopp’s side marooned from the Champions League berths by a chasm-like 13 points, while nothing should be written off with just over one-third of the season completed, defeat would have certainly turned a potential molehill into burgeoning mountain terrain.

This one represented only our fifth Premier League win of the season so far, yet three of them have now been claimed against 75 percent of the current top four, with the fourth of that quartet having been vaguely fortunate to take maximum points from us at the Emirates a month ago.

League wins against Man City and Tottenham have bookended losses to Nottingham Forest and Leeds.

It is a situation that makes little sense, but it does point to the potential for an unnecessarily laborious afternoon next Saturday when Southampton roll into Anfield.

Opponents who reside in the relegation zone and will be armed with a new manager, or at least a highly motivated caretaker. What could possibly go wrong?

In this respect, a victory over Southampton would arguably be a more noteworthy event than the win at Tottenham.

If Klopp’s side can rediscover their range against the rank and file, then this season can still be their partial oyster.

Don’t lose sleep over Real Madrid. By the laws of average, we’re due one against them and they know it.

Any other season across the last four or five years and we would be making huge purchase of a remaining league fixture list that no longer contains away trips to the Emirates, the Tottenham Hotspur Stadium, Old Trafford and Goodison Park.

By now, our visit to Stamford Bridge was also meant to have been circumnavigated. At some point, Liverpool will hit a run of consistency and we should be able to take advantage of the landscape we are presented with.

A place in the top four can still be comfortably ours by chasing down the pretenders that currently sit above us.

For all the quite rightful talk of a crisis at Anfield, both Tottenham and Man United have now lost as many times in the league as we have, while Arsenal’s traditionally soft underbelly will be tested as soon as they are deposed at the top of the table.

And the proof of the Newcastle pudding will be in their response to having to play twice a week on a regular basis once they have domestic cup fixtures to juggle.

For Liverpool, the task is different to their rivals.

While most of them are works in progress, Klopp presides over a team that has until recent developments been classed as the finished article.

Game-on-game, what we are seeing from Liverpool is outbursts of memory muscle. A piece of genius here, a gross misjudgement there (I’m looking at you, Trent Alexander-Arnold, in particular), with fortune favouring the brave – be that us or our opponents on any given day.

Just like Leeds and Forest took the spoils that their bravery deserved, Liverpool’s courage was rewarded on Sunday just as it had been a few weeks back against Man City.

We do have the power to walk away from this testing time all the stronger for it. We can still be the talk of the town.

Sliding doors are everything in football. On Sunday these were provided by the hands of Alisson and the framework of his goalposts. When Mohamed Salah is in a rich vein of form, you can’t afford to let us off the hook.

Amid all the calls for Klopp to rip his squad up and start again, it bears remembering that these were players that were good enough to take Liverpool to within two games of the quadruple just six months ago.

We do undeniably need fresh blood and new thinking on the pitch, but we don’t need Klopp’s equivalent to Bill Shankly’s Watford moment.

Balance is everything right now. One victory does not make a recovery, and nor does one defeat mark the end of an era.

Sometimes it just takes simple hard work to straighten problems out, be them of a technical, physical or mental nature.

Sunday wasn’t the perfect performance, but it was generally a good day; now let the kids loose on Wednesday, then go out again on Saturday and make another good day happen against Southampton.

We can all then reconvene on Boxing Day at Villa Park.

All of that said, improvements should still be considered in January rather than waiting until the summer.

Clearly, midfield is the elephant in the Liverpool dressing room, but quality rather than quantity should be the name of the transfer window game. Klopp does not need to build a bonfire.

While many Liverpool supporters are all-in on a protracted courtship with Jude Bellingham, unless some very clever groundwork has already been laid to pave his way to Anfield the attention he is attracting will only ramp up his projected transfer fee.

The less FSG a deal resembles, the less likely it is to happen. Unless, that is, change is coming in the boardroom sooner rather than later.

There are plenty of more midfielders in the sea, however, and the looming carbuncle of a World Cup means that we are, technically, only three league games away from the January transfer window.

Wednesday marks the beginning of our defence of the League Cup. Something of a standalone endeavour and a chance for new heroes to make a name for themselves.

It was a joy to win it last season, but I’d still like no risks to be taken on team selection. There are bigger fish to fry.