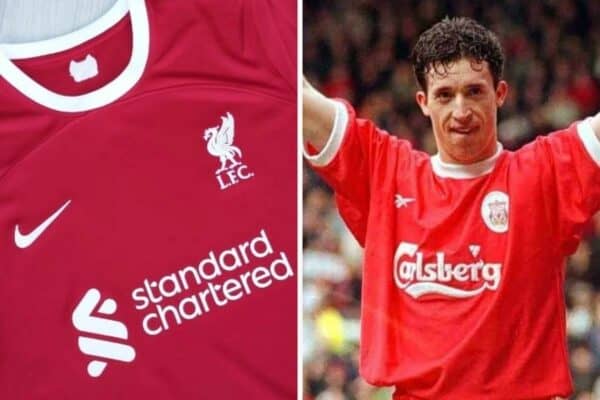 A reliable source for Liverpool kit news has seemingly leaked an early prototype of the new Nike shirt for 2023/24, which is a throwback to 1999.

Though the campaign is still in its early months, plans are already firmly in place for next season when it comes to the kits Jurgen Klopp‘s side will wear.

Earlier this week, colourways for the home, away and third kits were leaked, with ‘gym red’, ‘green spark’ and ‘space purple’ among the colours used.

Though it is, obviously, as yet unconfirmed, the shirt matches up with early mockups including the colourway, and follows this season’s kit as a simple design.

It features a basic red and white design, with all-over ‘gym red’ and white for the collar, cuffs and logos.

With its distinctive, bold collar and cuffs, comparisons have been made with the Liverpool shirts of the mid-1970s, but it is arguably closer to the Reebok kit of 1998/99 and 1999/00.

That was, in turn, inspired by the famous kit worn during the first FA Cup win in 1965.

Liverpool will not officially unveil their kits for the 2023/24 campaign until next summer, with the home shirt the first design released, typically around May.

All kits feature a tribute to the 97, which was updated as of this season to mark the passing of Andrew Devine, the 97th supporter unlawfully killed in the Hillsborough disaster.