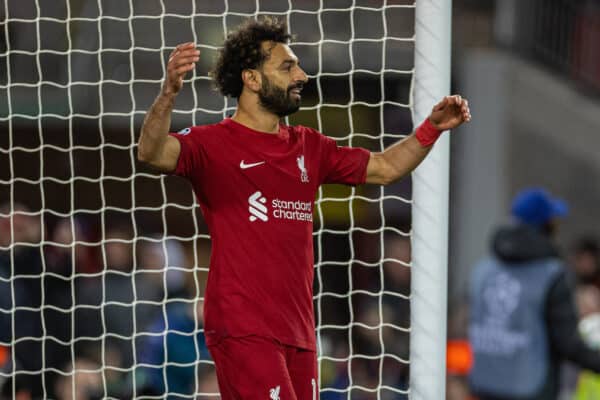 Mohamed Salah savoured a return to his “best” role on the right wing, as he equalled Steven Gerrard’s all-time goalscoring record for Liverpool in Europe.

Salah opened the scoring late on as the Reds earned a 2-0 victory over Napoli in the Champions League, which was his 41st goal for the club in Europe.

It could have gone to either Salah or Darwin Nunez, whose initial header looked to have crossed the line as Alex Meret attempted the save, but it has been officially awarded to the No. 11.

That brings him level with Gerrard as the club’s all-time highest scorer in European competition, with all 41 of his goals coming in the Champions League and 40 in the competition proper.

For Gerrard, only 30 goals came in the top-tier tournament, with the other 11 scored in the Europa League and UEFA Cup.

"We are not doing great in the league, hopefully, this gives us a push"

Salah is one goal away from breaking yet another record for Liverpool, and in his interview with BT Sport after the game, he relished doing so against “one of the best teams in the world.”

The victory over Napoli came after another change of formation, this time back to the 4-3-3, and Salah was asked about returning to the right flank.

“Any position that makes me comfortable, I’m happy about it, but I’ve played in the position for five, six years, I have to say yes, that position is the best for me.

“But I’m not the manager, the manager decides the tactics and, as a player, you have to follow the leader.”

Though they were unable to grab the four-goal margin that would have seen them finish top of Group A, Liverpool became the first side to beat Napoli in any competition this season.

Throughout his interview, Salah stressed the importance of the result on the Reds’ confidence, with focus turning back to the Premier League.

“But we just need to carry on. It’s a good result for us, hopefully it’ll give us more confidence.

“We just need to focus now in the cup and the league and carry on.”