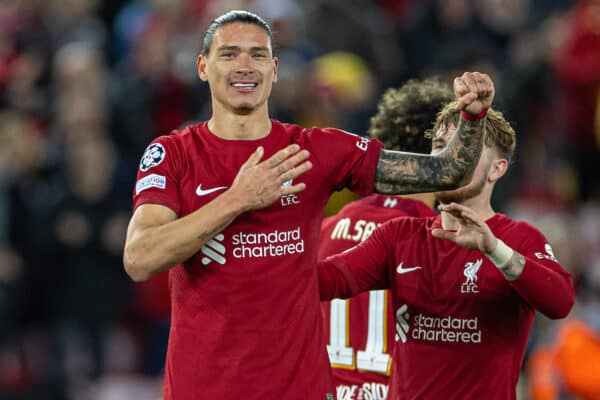 Liverpool’s Champions League group stage came to an end with an upturn in form and fortunes with a 2-0 win against Napoli.

A change in formation – again

Another game, another shape shift: Jurgen Klopp went back to the future for our midweek encounter, reverting to the 4-3-3 which served Liverpool so well for so long, and so poorly earlier this season.

It was the third different ‘formation’ in the last four games.

Once more there were clear midfield issues from early on with wide-open spaces causing problems for Napoli to pass through, and the full-backs being isolated defensively.

It wasn’t an issue for Kostas, who could match Politano for pace, but Trent was left so exposed against one of Europe’s most in-form wingers that it looked like Khvicha Kvaratskhelia was going to score or set up a goal every time he got the ball.

Perhaps this latest rotation was an element of who was fit and where they could best perform, quite as much as which system will get us winning again, but it’s now three formations in the space of four matches, following on from our 4-4-2 and shift to diamond.

They have all got overlapping elements of course, and the differences are more about which areas players are in out of possession than anything else, but that’s precisely what has been the big issue for the Reds this season: defending opponents, space and the ball.

The defensive work was individually better in the back line, but improvements are still needed in the centre of the park.

Konate on the comeback trail

A big part of that defensive improvement came via the return of our French centre-back.

Ibou Konate’s return brings us pace and power, aerial ability and good positional work, but also a reliability and presence that Joe Gomez has yet to rediscover after his long injury absence of 2020.

Konate was super aggressive up against Victor Osimhen, happy to track him all over the pitch and put in big tackles when needed, but was refined and composed in possession too.

More than once he Joel Matiped his way upfield, dribbling past a few challenges and opening spaces for others in the process – we shouldn’t be surprised if he starts capping those runs with fierce shots from range soon.

He has played fewer minutes this season than any of the other three seniors, but his performance level has probably been the highest.

Ok so, you take wins however they come. And a goal is a goal. But in the search for relentless wins, certain factors have to come into play.

One of those is the ability to conjure up good chances on goal, and another is being clinical enough to take them.

As such, while we will not bemoan beating one of Europe’s in-form sides and recording a fifth straight Champions League victory – and goals for Mo Salah in each of them, by the way – there are still questions to be asked over our attacking play.

At times the build-up play was decent up until the edge of the area, then it was somewhat lacking (until the crazy final few minutes).

Liverpool remained a big threat off set plays, and scored both late goals via that method, which is great – but corners are generally a low-probability chance for a goal and cannot be primary attacking functions on a regular basis.

Go back over recent matches: The goals in the 2-0 win over Rangers both came from set pieces. Against Arsenal both were open play and we can ignore the Rangers thrashing as an aberration. Against Man City it was open play, but from a goal kick really and route one.

West Ham was a corner, so was another one against Ajax and we failed to score at all against Forest, before tonight’s two off corners.

For real improvement it has to click at both ends still for the Reds and there’s work to do in the final third before we get to where we need to be.

Clean sheets – what do they even mean?!

At the other end, four clean sheets in six games sounds pretty good – but when we have conceded, we’ve lost!

Given they have come against bottom three sides domestically, perhaps the question is as much about the missing mentality of the team – concentration, awareness, over-eagerness, perhaps underestimating the opposition and everything else that goes into the mindset of the sport.

When we have been fierce, determined, full of running and deliberate about our work, it has been far more difficult (though not impossible) for teams to break through.

For the rest, there’s VAR and Alisson, thankfully.

The improvement we’re searching for was never going to be an overnight occurrence once it became clear that this season there are real issues to solve, but at least the knowledge that clean sheets can still be fought for and earned by this group gives us a base to improve from.

Let’s be clear: this European game was dead for both teams pre-kick-off, so while it was admirable effort and entertainment on show, there was no real risk to either.

At the weekend it’s very different – Liverpool have to put in a big show against a side currently in the top three.

A win would still leave us seven points off Spurs, albeit with a game in hand, but importantly it will probably close the gap a bit on a few above us given the fixture list this weekend.

It so clearly has to be a ‘Man City‘ type of performance, not a ‘Leeds‘ one. That should go without saying, but it’s another matter to actually do it, apparently.

The players must respond. The crowd did their part tonight, backed players who were so poor in front of them only a few days beforehand and roared the team to an ultimately irrelevant victory.

It works both ways though: now the Reds must go to London and put in a performance worthy of the name for the club, for the fans and for their own faltering hopes of Europe next season.