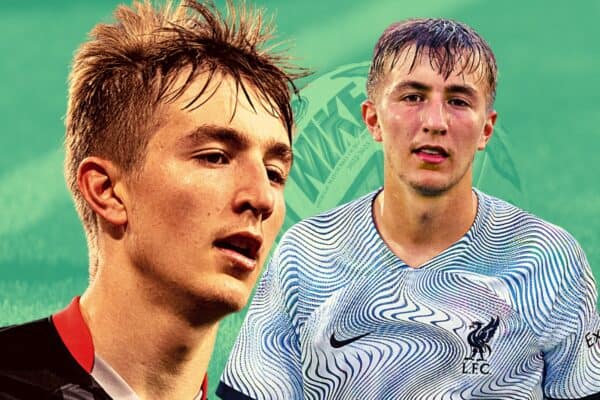 Journalist “wouldn’t be surprised” if loan striker returns to Liverpool

It has been a difficult first loan spell for Liverpool youngster Max Woltman, who could even return from Doncaster in the January transfer window.

Woltman enjoyed an excellent campaign last time out, with nine goals and two assists in 34 games in the academy along with his first-team debut in the Champions League.

After coming off the bench at the San Siro in December, it wasn’t long before the teenager had departed for much different climes, joining Doncaster Rovers on a season-long loan in September.

Heading to League Two was seen as the next step in the development of a talented young forward, but so far it has been tough time for Woltman.

His first two-and-a-half months in South Yorkshire brought just one start in nine appearances, playing more minutes for Liverpool’s under-21s before his move (281) than he has Doncaster since (197).

A change of manager at Doncaster has, so far, not seen a change in fortunes, and an early end to his loan is not out of the question.

To hear more about Woltman’s loan so far and the chances of a return to Liverpool, we spoke to Steve Jones (@JonesSteve93), Doncaster Rovers correspondent for the Doncaster Free Press.

What was the reaction when Doncaster signed a Liverpool player on loan?

Woltman was Doncaster’s only deadline-day signing and we needed a player in that position, so the addition was welcome news.

While he doesn’t boast much by way of first-team experience to date, he has great pedigree in youth and development football, and the fact he made his debut at the San Siro in the Champions League had plenty of us purring.

Clearly, there is a very talented player there.

Can you explain Woltman’s time at the club so far? Why has he only managed one start?

?? Max Woltman joins @drfc_official until the end of the season to play his first year in professional football. All the best! pic.twitter.com/M3V7U72TJR

Underwhelming for everyone concerned.

Gary McSheffrey, who brought Woltman to the club, said there was no pressure on him to come in and hit the ground running.

We all understood that position because of his lack of experience. But he hasn’t since kicked on.

We’ve seen flashes of his quality but it’s tough for a youngster with a slight build coming off the bench in League Two and often having to chase lost causes.

There have been few opportunities for him to show what he’s really about.

He was brilliant off the bench against Leyton Orient and helped turn the tide in that game – and keep McSheffrey in a job for a few days longer – which saw him rewarded with a start away at Carlisle the following week.

Unfortunately, Rovers didn’t play to his strengths, not least his ability on the ball, instead preferring to go long.

Unsurprisingly he had little joy and was subbed off.

Woltman was cup-tied in the Papa John’s Trophy, which would have been an ideal opportunity for some much-needed game time. That didn’t help him either.

Which roles has he been used in?

On the left of a front three and just behind the striker.

He was effective in the No. 10 role at the Eco-Power Stadium, where there is plenty of space and a good surface to play football on.

And when he has been on the pitch, has he impressed?

? A brilliant impact off the bench saw Max Woltman voted as your man of the match in the draw against @leytonorientfc. #DRFC https://t.co/IptNDNmzr6

This is League Two, however, and players have to get to grips with the division.

I would say he’s struggled to do that and found himself left out of the most recent matchday squad.

Can you see Woltman’s situation changing under Danny Schofield, or could we even see him return to Liverpool in January?

At this rate, I wouldn’t be surprised if he went back in January.

But if he breaks into the team before then – and it’s possible he might – we could see him play an important part for Rovers this season.