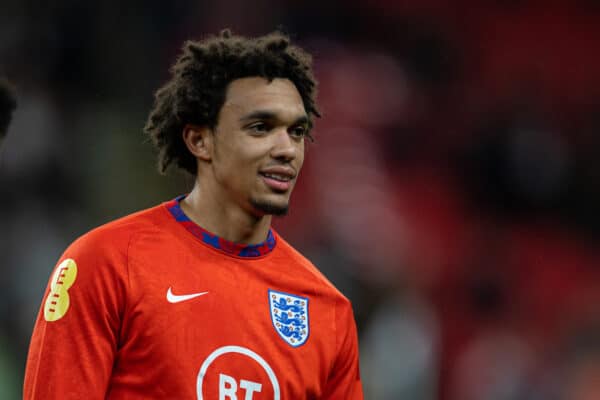 The England manager’s use of Alexander-Arnold has been a hot topic for some time, with doubts over whether the Liverpool right-back would make his squad for Qatar 2022.

But the Scouser is one of three natural right-backs included, with Man City‘s Kyle Walker and Newcastle‘s Kieran Trippier also in the final 26.

The other Liverpool player who will be part of England’s squad is Jordan Henderson, who is one of six midfielders selected by Southgate, alongside Declan Rice, Kalvin Phillips, Jude Bellingham, Mason Mount and Conor Gallagher.

Henderson remains England’s vice-captain, but only played a bit-part role in their Euro 2020 campaign as he continued to recover from a long-term injury.

Both Alexander-Arnold and Henderson were also part of the England squad that reached the semi-finals of the 2018 World Cup.

Alexander-Arnold’s place in the squad for this year’s tournament would have been less certain if Reece James was fit, with the Chelsea right-back missing out due to a knee injury.

During the last international break, Liverpool’s No. 66 was left out of England’s matchday squad for their friendly with Germany at Wembley.

After the game, Southgate explained his decision by claiming he felt Trippier’s all-round game was “ahead” of Alexander-Arnold’s.

Those comments leave you wondering whether the 24-year-old will actually end up featuring in Qatar, but the player himself will be relieved to have made the squad.

Despite a late clamour for his selection after a good performance against Man City in October, Joe Gomez misses out, having struggled to retain that form in recent matches.

Harvey Elliott was another who had been in the conversation for the squad at times this season, but as expected, he is not included.

Five Liverpool players have now been called up for the tournament, with Alisson and Fabinho included in Brazil’s squad and Ibrahima Konate selected for France.

Virgil van Dijk and Darwin Nunez are expected to feature for the Netherlands and Uruguay, respectively, while it remains to be seen whether Thiago will be included for Spain.