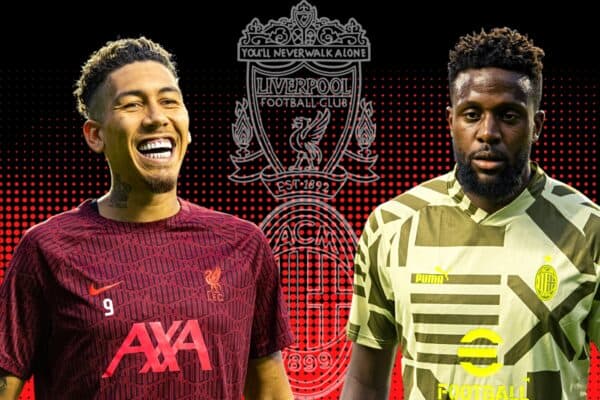 10 key things to know ahead of Liverpool vs. AC Milan in Dubai Super Cup

Liverpool’s second and final friendly in Dubai pits them against AC Milan on Friday afternoon – here’s everything you need to know about the match.

The Dubai Super Cup has already been won by Arsenal after two victories and two bonus penalty shootout points, with AC Milan tasting defeat to the Gunners on Tuesday.

Stefano Pioli’s side conceded two goals in the first half to Martin Odegaard and Reiss Nelson, before Fikayo Tomori pegged one back in the second half – the match would end in a 2-1 defeat for the Italians.

The penalty shootout that followed saw Arsenal emerge as 4-3 victors, Brahim Diaz and Rade Krunic both missed for Milan to ensure their first game ended in the same manner as Liverpool’s.

A reunion with cult hero Divock Origi certainly looks to be on the cards, seven months after he bid farewell after eight years at Anfield.

The Belgian joined AC Milan in the summer and has since made 14 appearances for the Serie A outfit, scoring once in that time – having only just worked his way toward regular minutes before the World Cup break.

Origi played 56 minutes against Arsenal on Tuesday and looks set for more against the Reds – it’s the type of reunion we all love to see.

3. Anyone back for the Reds?

The Reds initially named a 33-man squad for their training camp in Dubai but have since seen Luis Diaz have surgery on a knee injury, while Curtis Jones looks to be carrying a minor injury.

Darwin Nunez returned to training on Monday, but who can we expect to be available for Friday’s match?

Klopp will likely follow a similar formula to that of the Lyon game, dishing out at least an hour to his key senior figures before handing minutes to youngsters and potentially even Nunez.

Harvey Elliott was withdrawn before the half-hour mark during Sunday’s defeat to Lyon and Klopp was hopeful that “we were lucky” with the issue that had many fearing a period on the sidelines.

And luck looks to be on the Reds’ side as Elliott was part of training on both Tuesday and Wednesday, a strong indicator he will be available for selection against Milan.

Jones was still absent, though, while Calvin Ramsay was not pictured with the main group on Wednesday to leave him in the doubtful category for Friday.

5. Where are the goalscorers?

AC Milan are to be without their two leading goalscorers this season in Olivier Giroud (9) and Rafael Leao (7) due to their World Cup exploits, with the former still involved with France.

The two account for 42 percent of Milan’s goals so far this season.

Conversely, Liverpool’s top goalscorers in Mo Salah (14), Roberto Firmino (9) and Nunez (9) are all in contention to feature, a trio who account for 69.5 percent of the Reds’ goals to date.

Liverpool played Milan in a competitive setting twice in 2021, but the last friendly to take place between the two clubs was back in 2016.

Levi’s Stadium in Santa Clara, California played host to the two teams and it was the Reds who left with a 2-0 win to their name thanks to goals from Divock Origi and Roberto Firmino.

It was the first pre-season tour with the club for Klopp and he mainted the winning record over the Italians in friendly meetings, with Liverpool winning both the 2014 (2-0) and 2002 (2-1) games.

Will it be four from four in friendlies for the Reds?

Arsenal have already been crowned the winners of the tournament after accumulating eight points from their two games, meaning no team can catch them.

Lyon finished their time in Dubai with four points after a win and bonus penalty shootout point against Liverpool.

Both the Reds and Milan remain on zero points but one of the two teams can still yet finish on four points with a win and shootout triumph on Friday.

At the end of the day, the Dubai Super Cup standings will not bother Klopp and co. with the important business only getting back underway on December 22.

8. ‘Giving it absolutely everything’

The season has been a topsy-turvy one for Liverpool but Kostas Tsimikas, speaking to the club’s official website, has seen the hunger from his teammates to make positive strides on their return to action throughout their time in Dubai:

“It’s a frustration because we lost many games we didn’t want to lose. That’s why everybody – from the boys who train here – give absolutely everything.

“We want to be on the highest level we can be. So, of course, [it] was [a] frustrating start, but it’s not the point.

“The point is if we want to achieve our goals, we have to be 100 percent there and to win football games.

“To be honest, we had a very tough programme. Even when we had the break, every player here came [back] very good physically.

“We have to work – we do every day. Every single day we work very hard. I can see from the boys, everybody is hungry for the rest of the season. I’m really looking forward to the next games.”

Liverpool will make the journey back to Merseyside with their focus shifting to their competitive return at Man City in the Carabao Cup on December 22.

By that time, Klopp will have Alisson, Fabinho, Virgil van Dijk, Trent Alexander-Arnold and Jordan Henderson back in training following a week off after their World Cup exits.

Their involvement at City is not assured, though, as Liverpool will be eager to ease them back in and keep their eye on the bigger picture.

Friday’s friendly against AC Milan kicks off at 3.30pm GMT (7.30pm local time in the UAE), with the match shown exclusively on LFCTV.

You can live stream the game on LFCTV here.

This Is Anfield’s matchday live blog will also be in full swing, with Sam Millne at the helm from 2.45pm, keeping you entertained and informed throughout.

This Is Anfield’s coverage of Liverpool FC in Dubai is brought to you in association with LFCRetail UAE.