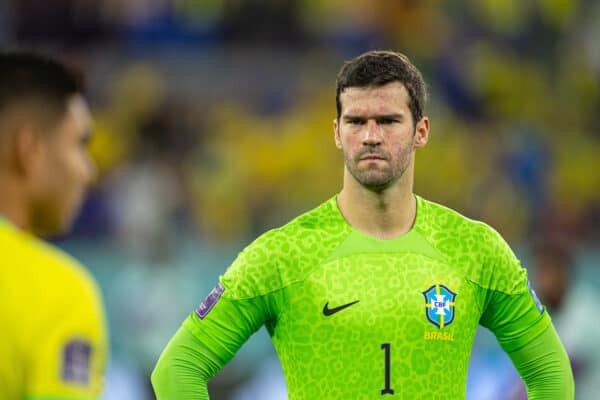 Brazil looked to be on their way to a spot in the semi-finals of the World Cup, only for a fightback from Croatia to send Alisson, Fabinho and Co. home.

Having arrived in Qatar as favourites, Brazil breezed their way to the quarter-finals as they beat Serbia and Switzerland in the group stage and then South Korea in the last 16.

That set up a clash with Croatia in Al Rayyan, with their opponents showing their resilience throughout an impressive start to the tournament.

Croatia brought that into the quarter-finals, as they held on until the halfway point of extra time, before a stunning opener from Neymar.

Brazil looked primed for victory, only for Bruno Petkovic to fire home and celebrated wildly as he clinched a penalty shootout.

Alisson has pedigree in shootouts, of course, but Croatia’s Dominik Livakovic was the hero as he denied Rodrygo to seal a 4-2 victory, with Marquinhos hitting the post.

That leaves the goalkeeper to exit the tournament along with Fabinho, with the pair now set for time off before rejoining their Liverpool team-mates.

It remains to be seen whether they fly to Dubai to take part in the latter stages of the Reds’ training camp, but it is more likely that they reconvene on Merseyside.

There is a chance, now, that they are involved in the Carabao Cup fourth-round tie at Man City on December 22, and certainly against Aston Villa when the Premier League restarts on Boxing Day.

They will do so in bitter circumstances, having hoped to bring the World Cup back to Brazil for the first time since 2002.

Alisson and Fabinho follow Darwin Nunez in being knocked out of the tournament in Qatar, with Virgil van Dijk to play on Friday night before Trent Alexander-Arnold and Jordan Henderson face off with Ibrahima Konate on Saturday.