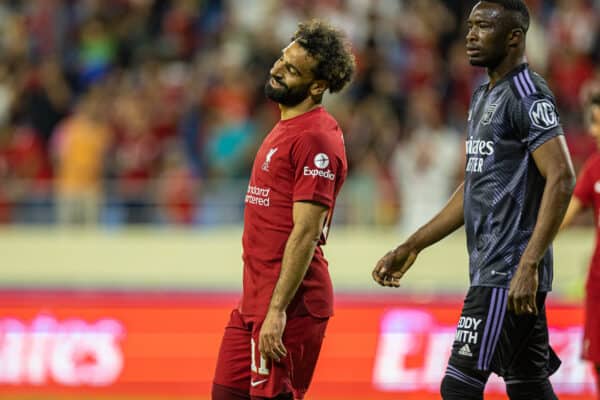 Liverpool’s return to action started in the best possible way, but they fell to a 3-1 comeback defeat to Lyon in the Dubai Super Cup – and lost on penalties as well.

The most notable part of the lineup saw Joel Matip back in the team, following an injury-interrupted first half of the campaign.

Our big centre-back looked fairly sharp and fine in positional play, passed out well and did the defensive bits he was required to.

It wasn’t the most demanding 45 minutes, but the more noticeable aspect of his return was that in the second half after changes at the back, the Reds looked an awful lot easier to bypass.

We also saw one half with Caoimhin Kelleher in goal; another who was missing in action for most of August to November through injury.

He saved on 34 minutes from a powerful shot straight at him, but was beaten by Andy Robertson‘s toe-poke as he came out to the edge of his box, leaving a clear route to goal for Lyon’s equaliser.

Kelleher will surely start in the Carabao Cup before Christmas, so the runout here was certainly necessary.

Whether he should have stayed deeper for the goal, or whether he gave a shout and Robbo’s interference resulted in it, is up for debate.

Ramsay nearly scored but also couldn’t deal with balls to the back post which resulted in big chances and goals.

Of the midfielders, the latter entered the fray after the hour; Oxlade-Chamberlain ended the game up front.

No need to read much into performance levels, as it’s just minutes and fitness, which – yet again – remain important for both.

Well, if we’re making a list of ‘ideal outcomes’ from warmup matches, fitness comes top of the list even before form, excitement and goals.

That makes the fact Harvey Elliott departed after just half an hour quite the concern.

The attacking midfielder had made a few runs into the box from deep and looked relatively sharp beforehand, but perhaps one of those last bursts he made tweaked something before his departure – he got into the area and had a shot, but it was awkward and scuffed.

The latest from Jurgen Klopp was the hope that “we were lucky,” though we’ve been there before and been burned when it comes to injuries.

Adding in longer-term concerns over Luis Diaz, the fact Diogo Jota is still out and Darwin Nunez still recovering from World Cup exertions and already there will be one or two furrowed brows over attacking options once the season restarts.

There’s also the question over Curtis Jones, who is with the squad but hasn’t trained much and didn’t feature here.

Not talking here in terms of match action, but in how ‘switched on’ the players appeared – and the difference in showings from the youngsters and fringe players who came on.

Roberto Firmino looked sharp, was involved in both the Reds’ goal and the penalty they won, and generally looked as though not sitting on the bench for Brazil for three weeks might have done him some good.

Mo Salah made some decent runs, set up (sort of) the first-minute goal and was just about the only player to get the crowd on their feet, but he also saw a pretty poor penalty saved.

Fabio Carvalho, the third starting forward, linked play at times and scored after 40 seconds, but was quiet thereafter.

After the restart, there were flashes of excitement from Ben Doak and Dominic Corness in particular, but at the back it was rather more scattered, inconsistent and lacking in understanding from the Reds.

Some were missing through World Cup duty, sure, but those who stepped in didn’t do their chances too much good.

Yes. Possibly if you haven’t been tuned into the Reds’ mid-season pre-season buildup you’ll have missed the somewhat bizarre decision surrounding the Dubai Super Cup rules.

Regardless of the result, this game – and our one against AC Milan – goes to penalties.

There’s three points for a win, two for a draw and then another one for winning the shootout later on.

Obviously, this hasn’t helped the Reds in any way at all as we now sit on zero while Arsenal and Lyon are on four.

Conclusions? Not much in terms of who might take them for the Reds if neither Mo nor Milly are on the pitch, but Kostas evoked some nice cup final memories.

Probably better that Ali or Caoimhin are in goal for ones which matter rather than Adrian, though.

Building up to City – or Villa?

Depending on your point of view, Liverpool have two matches which don’t matter too much, or perhaps a third.

A train of thought suggests Klopp will play his (available) key players in the Carabao Cup against Man City just before Christmas, not because it’s a massive match we simply have to win, but because it’ll help get peak fitness levels quicker.

As such, we can expect to see some of the seniors who played here against Milan once more, perhaps the likes of Salah, Matip, Thiago and others.

And sure, the Reds are the reigning holders of the cup. But it isn’t going to save our season.

Really, this is all about making sure the early months of this season are wiped from the slate and that the Reds are ready to bounce back into matters in a good mindset and good shape, when we play Aston Villa on Boxing Day.

There’s ground to make up in the Premier League and the top four has to remain the absolute bare minimum.

One big training game down, another one to go.