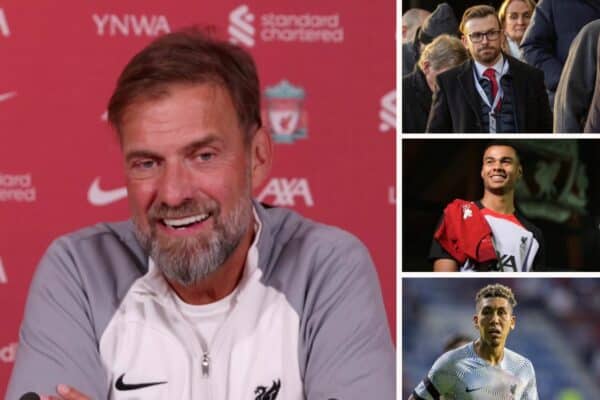 Jurgen Klopp spoke to the media ahead of Liverpool’s game against Leicester, but much of the focus was understandably on new signing Cody Gakpo.

Of course, much of the press conference focussed on new signing Cody Gakpo.

Firstly, Klopp explained that it was unlikely the new No.18 would feature vs. Brentford on January 2, with the FA Cup tie vs Wolves on January 7 the planned time for his first involvement.

One thing Klopp did highlight was Gakpo’s versatility in attack. “He can play all four positions up front,” said Klopp.

“The position he’d probably say himself he prefers to play is the left wing in a 4-3-3, but for us it’s clear he can play in other positions. We know that and that’s what made him so interesting for us.”

The boss was asked if Gakpo’s arrival will impact Roberto Firmino‘s future, with the Brazilian’s contract expiring at the end of the season.

Klopp was unequivocal in his response, though, saying that he “definitely” wants Firmino to stay.

“We have talks with Bobby and I can say, from my point of view, I want him, definitely, to stay.”

Glad to keep deals in secret

The deal with Gakpo went under the radar, being announced by the selling club less than an hour after the first report of talks being underway.

Klopp said that this was “a really good sign” and praised sporting director Julian Ward.

On the potential of more arrivals this month, Klopp said: “We know what we want to do and we will see if we can do it.

“It’s about the money, but it’s more about the right players.”

Could we see a midfielder arrive in January?

And there was positive news too on the injury front, with no new injuries since the win at Aston Villa on Boxing Day, plus Ibou Konate being back in training and therefore available vs. Leicester.

It could be an unchanged team vs. Brendan Rodgers’ side at Anfield.