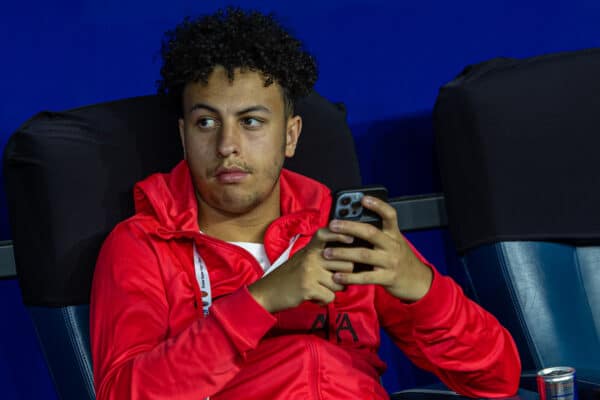 Good news on Kaide Gordon comeback as coach insists: “We didn’t forget him”

As Kaide Gordon steps up his recovery from a long-term injury that has kept him out since February, Pepijn Lijnders has insisted “we didn’t forget him.”

Gordon joined the Liverpool squad in Dubai as he reached a major milestone in his rehabilitation, running outside at the NAS Sports Complex.

The 18-year-old was sidelined not long after his breakthrough into the first-team setup on the turn of the year, with various issues including a pelvic injury keeping him out.

But with the winger still involved as part of the senior squad, there are clear signs that he remains part of Jurgen Klopp‘s plans, with recovery work continuing upon return to the AXA Training Centre.

Though Gordon has a long way to go before he is considered for matchdays, Lijnders took the opportunity to praise his attitude during Wednesday’s pre-Man City media duties.

“First of all, because it’s the League Cup I want to mention Kaide Gordon,” the assistant manager told the club’s official website.

Good to see Kaide Gordon making positive progress in his rehabilitation. After such a bright start to 2022, it's been a difficult year for the 18-year-old.

“[We] didn’t mention him in a long time, he went with us to Dubai and started running [for the] first time.

“We know with these long-term injuries, where there is a lot of uncertainty, that he deserves a mention as well because the boy is very professional and gives everything.

“I just hope we can see him back without putting pressure on the boy.

“It’s great to see him on the pitch [and] just to tell him as well that we didn’t forget him.

“Even when new boys are coming up and flying and making big steps, we never will forget the old young ones, basically.”

With Lijnders’ mention of the “new boys” catching the eye, it is worth noting the progress of Ben Doak and the growing esteem he is held in among Klopp’s staff.

Like Liverpool’s No. 49, Doak is a natural right winger, with the 17-year-old Scot just 13 days older than Gordon was when they made their respective debuts in the Carabao Cup.

Gordon’s layoff has certainly laid the pathway for Doak, but it also serves as a cautionary tale for those with high hopes for this next wave of youngsters.

The hope is that when fully fit, Gordon can join Doak in challenging the senior players such as Mohamed Salah as part of a hugely promising future for Liverpool.