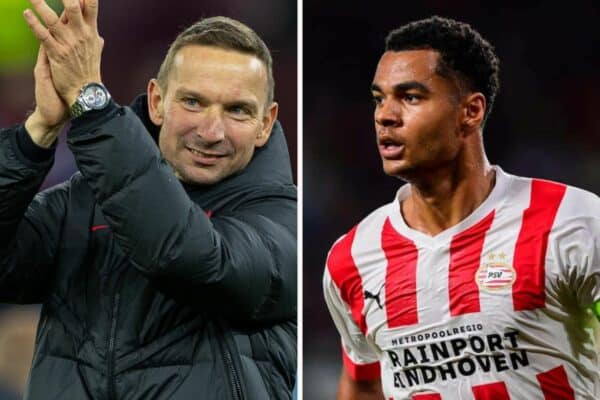 With Liverpool on the verge of wrapping up a deal to sign Cody Gakpo from PSV, a Pep Lijnders claim from November has resurfaced again on social media.

News of the Reds’ interest in Gakpo emerged after the Boxing Day win at Aston Villa, with the Eredivisie side confirming the agreement late in the evening.

Man United had long been linked as the Netherland forwards’ most likely destination, but just as they did to secure Luis Diaz‘s signature this time last year, Liverpool have swooped in to steal a march ahead of other suitors.

Some saw this move coming, with Hans Kraay Jr, a former Dutch footballer and television presenter, claiming to have spoken to Liverpool assistant boss Lijnders about Gakpo in November.

A tweet from @FootballOranje_ last month revealed details of the supposed conversation, with Lijnders believed to have referred to Gakpo as the “missing link,” leaving Kraay Jr convinced that Liverpool would make their move.

Lijnders is likely to know fellow countryman Gakpo well, and spoke in similar terms of Diaz after he arrived from Porto midway through last season.

The club will clearly be hoping that the 23-year-old can have a similar impact, with Diaz and Diogo Jota still recovering from long-term injuries.

There has been a suggestion that the Gakpo deal is the start of a new era for Liverpool’s recruitment, with Jurgen Klopp and Lijnders taking on more responsibility for transfers, as Julian Ward prepares to leave his role as sporting director next summer.

And while those claims are largely unfounded, it would be no surprise if Liverpool’s coaching staff are the ones who have led the club’s pursuit of Gakpo.

With 30 goal involvements in 24 games at club level this season, the ability to operate in a number of forward positions, and a relatively cheap price tag, Gakpo ticks plenty of boxes for the Reds.

Where he fits in remains to be seen, but that’s certainly not the worst problem for Klopp and Lijnders to have on their hands.