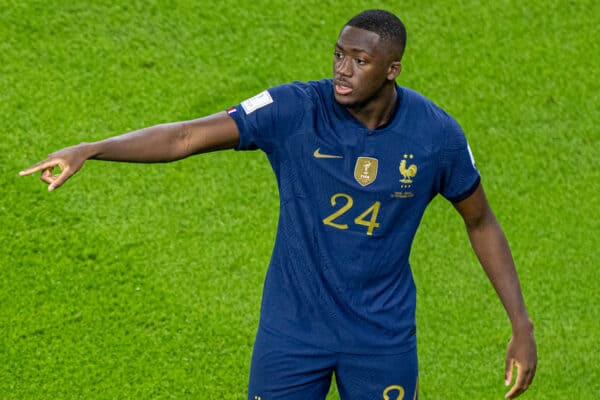 Ibrahima Konate played a key role in France’s 2-0 victory over Morocco in the semi-finals of the World Cup, with one stat summing his tournament up.

It has been a strange but successful World Cup for Konate so far, finding himself third-choice centre-back but clearly outperforming those ahead of him.

Raphael Varane’s place as the most senior starter at the back is understandable, but the gulf in output between Liverpool’s No. 5 and his former RB Leipzig team-mate, Dayot Upamecano, has been vast.

With Upamecano sidelined due to illness on Wednesday night, Konate was given a big chance to shine again, as he partnered Varane in the semi-finals.

Up against the tournament underdogs in Morocco, it was set up as a tough test for the France defence, but Konate excelled in a standout performance for the now-finalists.

Taking his place as left-sided centre-back, rather than the right-sided role he fills for Liverpool, the 23-year-old utilised his pace, strength, reading of play and quality on the ball to his advantage.

At one point during the game, the official France national team account tweeted: “Ibou is monstrous.”

That fact has been hammered home by a statistic from Opta, who have revealed that Konate has averaged 6.9 tackles and interceptions per 90 minutes so far in Qatar.

6.9 – Ibrahima Konaté is averaging 6.9 tackles + interceptions per 90 minutes at the 2022 World Cup, the most of any player with 3+ starts. Colossus. pic.twitter.com/pWwfh1Cvdb

That is the most of any player who has started three or more games, with Wednesday bringing his third start and a fourth appearance at this year’s tournament.

The Netherlands’ Teun Koopmeiners (6.1) was the next closest, with Upamecano (four) considerably behind according to WhoScored.

Konate is the only Liverpool player left at the World Cup, with the other six representatives now due to rejoin the squad for preparations on Merseyside next week.

And his display against Morocco did not go unnoticed, with many supporters now calling for him to start the final against Argentina:

The French MOM was @IbrahimaKonate_ I can’t see how he can be left out of the starting eleven in the final! #QatarWorldCup2022

No matter how many times I watch Ibrahima Konate, I’ll never not be blown away at how complete his skill set is for 23 years of age.

He has every attribute a manager would desire from an elite-level centre half. I’d struggle to name a weakness in his game

Ibrahima Konate was unreal for France tonight. He has to start in the World Cup final on Sunday.

Surely Konate starts the final after this. What an honour for him if it happens.

Konate should be starting in the final, would be extremely harsh to drop him. Rock solid tonight.

Been some brilliant Morocco performances tonight. Greizman and Konate by a distance France best players. ????

Ibrahima Konate (having a busy day) is a really good defender. ?#FIFAWorldCup

Konaté’s cover defending in that inside left channel behind Theo was unreal. It was a mirror image of what you see when he sweeps behind Trent at RCB. He reads the game to a crazy high level & it doesn’t even matter whether it’s LCB or RCB.

It's not often defenders have the gift of being monstrous physically (acceleration, pace + body strength) and still have a top-class read of the game. Ibrahima Konaté has both – plus a nice passing foot and good decision-making. He's the complete package.

Konate is insane. He started one league game coming into this tournament – and has looked like France's best defender whenever he's been called upon. Huge, huge future.

Deschamps picking Upamecano over Konate throughout this tournament is a sackable offence in itself.

It is becoming a trend of Konate’s young career that he is bizarrely underrated while wildly exceeding expectations, which has been the case with those on the outside looking in at club level.

But Liverpool supporters have long known this is a world-class centre-back in the making – and in three days’ time, Konate could be a world champion.