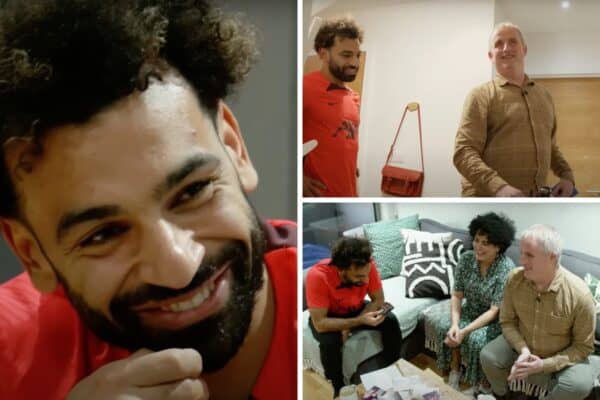 “It can’t be you!” – Mo Salah’s touching surprise for Liverpool fan with Shankly challenge

Mohamed Salah is no stranger to putting smiles on faces when he’s on the pitch, but it’s also the case off it, as his heartwarming surprise for lifelong Red Eamon demonstrated.

Jurgen Klopp truly has created a squad full of good human beings, with what the player has to offer off field just as important as what he can bring on it – as we’ve seen time and time again.

Salah is no different. And he was the latest Red asked to help surprise an unsuspecting fan with the help of Liverpool and their partner Nivea Men.

Eamon has been a season ticket holder on the Kop for close to 30 years and travels to watch the Reds home and away, and was nominated for the surprise for his selfless charity work.

Eamon is blind and follows games with the radio and his friend Tage, who nominated him, said: “Eamon does a lot for charity, his football, cricket, biking. We don’t understand how he does it.

“He knows his football, shouts at the players at the right moments, I’ve started wondering, ‘is he really blind?'”

Salah made the visit to Eamon’s home and made himself recognisable by his voice, though there was a level of disbelief that the Egyptian king was in his living room – think we’d all be the same!

The two enjoyed a chat over a cup of tea, called Eamon’s dad – who shared the same disbelief – and discussed a number of important subjects.

“The one message I’d given anyone, don’t underestimate the power of getting involved and moving around,” Eamon said, a “powerful message” in the words of Salah.

The winger was particularly interested in hearing about Eamon’s challenge of cycling from Bill Shankly’s birthplace Glenbuck to Anfield, stopping at each of the clubs he represented during his journey.

And that is when the next surprise came, with Nivea Men revealing they will purchase new tandem bikes to “enable you and others who are visually impaired to continue to cycle,” helping to further aid Eamon’s work in the community.

A heartwarming surprise that we love to see.