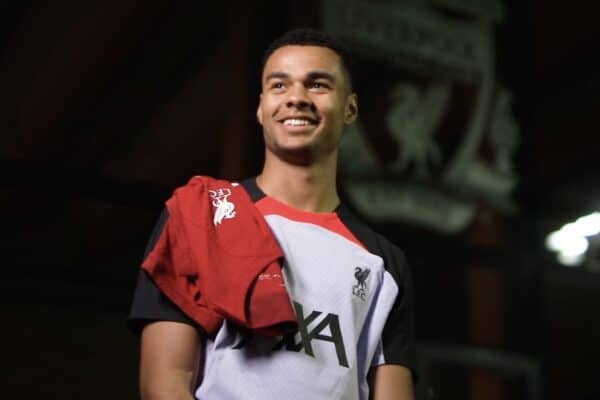 Jurgen Klopp is “not too positive” that the paperwork will be signed for Cody Gakpo to be involved when Liverpool take on Brentford on January 2.

Liverpool announced Gakpo as their latest signing late on Wednesday night, but the Dutchman will not officially join the club until the start of January.

In England, the transfer window opens on New Year’s Day, while it will open in the Netherlands the following day – which is a Bank Holiday in the UK.

Therefore, there are doubts over whether Gakpo will receive his work permit in time to feature at Brentford on Monday, with Klopp reflecting as much in his pre-Leicester press conference.

“What I heard now – so we are obviously very early, which is good – there might be a chance for Brentford,” he told reporters.

“But I think not really, because the 1st of January is a Bank Holiday and, all the papers, other people have to sign on the 2nd until lunchtime.

“I’m not too positive that that will happen!”

Klopp added: “We will not rush it anyway, so probably [against] Wolves.”

Around the reports of Gakpo’s switch to Merseyside, much was made of Virgil van Dijk‘s role in persuading his international team-mate to join Liverpool.

But Klopp played down Van Dijk’s influence on the deal, insisting that when it came to convincing his new No. 18 to make the move, it was a “home run.”

“Before he technically signed, yes [Virgil spoke to him],” the manager admitted.

“Virg was involved from a specific moment on, but we didn’t tell him ‘talk to him’.

“When I was allowed to speak to him, I spoke to him.

“Some of these nice moments when you are manager of Liverpool Football Club, you think you have to convince somebody and you realise the door is wide open.

“This one was a home run. We didn’t need Virgil to convince him, but after that, obviously Virgil likes to be involved in these kinds of things.