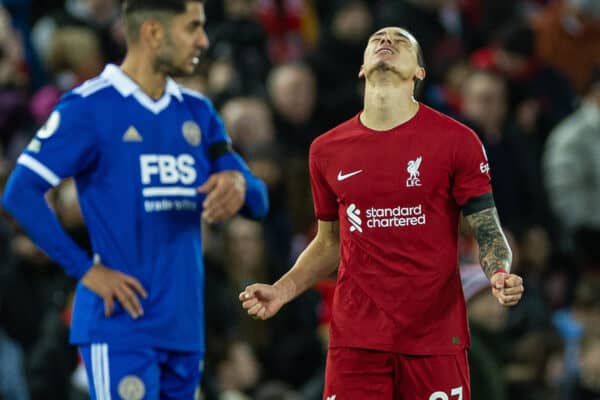 Liverpool 2-1 Leicester: Reds ride their luck to end 2022 with win

Two own goals handed Liverpool an eventually deserved 2-1 victory over Leicester, ensuring they end 2022 with four Premier League wins in a row.

For all the talk of improvements made during the mid-season training camp in Dubai, Liverpool have displayed the same old problems in their games since returning.

That was the case when, four minutes into their final game of 2022, Kiernan Dewsbury-Hall was allowed to saunter through a weak Jordan Henderson challenge, between the centre-backs and on for an easy finish beyond Alisson.

The first real opening for Liverpool came in the 23rd minute, and it was through the pace of Darwin Nunez, who raced onto Alex Oxlade-Chamberlain‘s pass and cut back for Mo Salah, who was unable to hit the target.

Salah did find the back of the net only to be ruled out for offside, but Leicester centre-back Wout Faes restored parity with a comedy own goal that looped over Danny Ward and in at the back post.

Somehow, Faes managed to outdo himself before the break, too, with Nunez’s chip rebounding off the post only for the centre-back to lift it into his own net for 2-1.

Liverpool nearly enjoyed the perfect start to the second half straight from a Trent Alexander-Arnold throw, but Henderson’s clever half-volley drifted just wide of the post.

A stunning through pass from Nunez then set Salah through one-on-one with Ward, but the Egyptian again missed the target, while Alisson denied Harvey Barnes at the other end.

Much of the Reds’ issues remained in midfield, with Henderson and Harvey Elliott both struggled to either control possession or employ the improvements Jurgen Klopp hoped for in gegenpressing.

Another glorious miss from Nunez came after a fine pass from Naby Keita, before pouncing on another mistake from Faes to set Salah up for another chance saved by Ward.

It never came for the No. 27, but just like at Aston Villa on Boxing Day, Liverpool did just enough to take home a fourth consecutive league win.