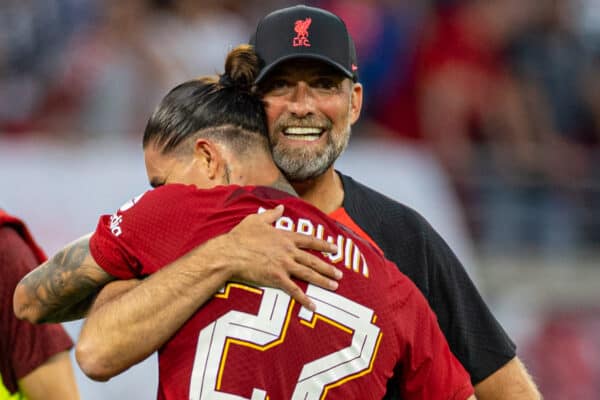 Liverpool will conclude their time in Dubai with a friendly against AC Milan on Friday, with Darwin Nunez in contention to feature after reconvening with his team-mates earlier this week.

After defeat to Lyon last Sunday, the Reds know there is no way for them to win the Dubai Super Cup, after Arsenal were crowned winners of the mini tournament on Tuesday.

Having beaten Lyon and AC Milan in normal time and on penalties, the Gunners have already accumulated eight points, with both Liverpool and Milan now only able to finish with a maximum of four.

Nonetheless, Friday’s encounter will be another useful exercise for Jurgen Klopp‘s side, ahead of their return to competitive action next week.

Here, we look at two ways the Liverpool boss could choose to line up against the Serie A champions.

The latest team news from Dubai:

Klopp named what was effectively his strongest possible team from the start against Lyon, and it would be no surprise to see him go with the same approach vs. Milan.

Should that be the case, there may only be one change to his line up on Friday:

That would see Liverpool take to the field like this:

However, with Carvalho on the scoresheet against Lyon, and Naby Keita back to fitness, there are other options for Klopp.

The Liverpool boss may opt to bring both into his midfield:

Those tweaks would see Liverpool line up like this:

Klopp used the vast majority of his squad last Sunday, but with less than a week until the Carabao Cup tie against Man City, don’t be surprised if he opts to give his senior players more minutes against Milan, with less opportunities for the youngsters.

Should he be available, Calvin Ramsay will be hoping for more game time, as will Kostas Tsimikas and Alex Oxlade-Chamberlain.

Alisson, Fabinho, Virgil van Dijk, Trent Alexander-Arnold and Jordan Henderson are expected to return to training back on Merseyside next week.