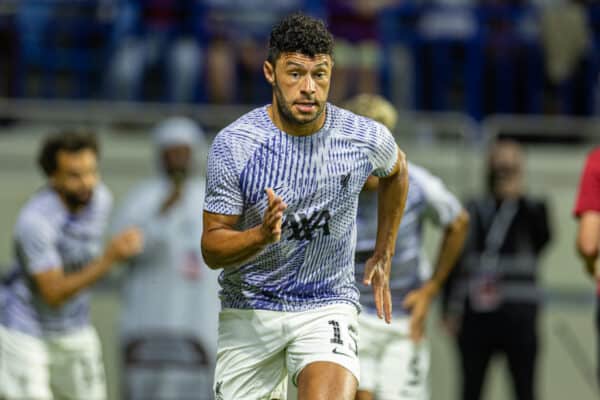 Alex Oxlade-Chamberlain could make his first league start since February, and only his second start this season, when Liverpool visit Aston Villa.

The Reds will make a swift return to action after Christmas, when they head to Villa Park for their first Premier League game in over six weeks.

A hard-fought defeat to Man City in the Carabao Cup served as a welcome refresh following the World Cup, and now Jurgen Klopp is hoping for a revival of fortunes in the league.

However, matters are made more difficult by injury and illness throughout the squad, while Ibrahima Konate is yet to rejoin his team-mates after France duty.

So how could Liverpool line up on Boxing Day?

Speaking in his pre-match press conference on Friday, Klopp revealed the following:

Following the 3-2 loss to Man City in midweek, Klopp revealed that Oxlade-Chamberlain had been in line to start, only for illness to change his plans.

The 29-year-old came off the bench and looked sharp, however, and Boxing Day could bring a rare start as he fills in for the injured Firmino.

His inclusion could come in a Liverpool lineup that many would consider the strongest possible XI, perhaps bar Konate:

Those changes to the side that lost to City would see the Reds line up like this:

That doubts remain over Alexander-Arnold’s fitness do make it more difficult to predict the Liverpool XI, however.

If the No. 66 is not passed fit to start, it could be that Klopp turns to Joe Gomez at right-back, while there are other decisions to make in midfield and attack:

That would see this Liverpool side take to the field:

With a virus threatening the squad, exactly which players will be available to Klopp remains up in the air.

But if fit, it seems likely that Oxlade-Chamberlain will be handed another opportunity to impress against a side he has only lost once to in 12 meetings throughout his career.