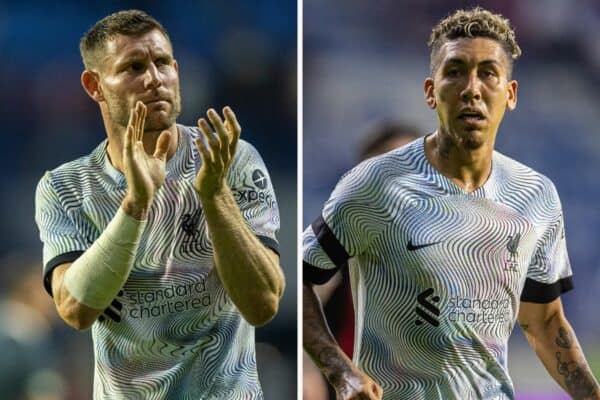 Milner & Firmino “out for a couple of games,” but 2 could return at Villa

Speaking ahead of Liverpool’s Boxing Day trip to Aston Villa, Jurgen Klopp revealed James Milner and Roberto Firmino are facing a spell on the sidelines, but there was better news on several others.

Milner was withdrawn in the first half of the Reds’ defeat to Man City on Thursday, with Klopp hopeful after the game that his injury wouldn’t be anything serious.

However, speaking to reporters the following day, the boss revealed his vice-captain would miss “a couple of games.”

The same applies to Firmino, although Klopp says the club’s medical staff will assess his recovery from a calf injury “day-by-day.”

“Milly didn’t get better since then, he’ll be out for a couple of games,” Klopp said in his pre-match press conference.

“Same for Bobby. He’s on the better side of it, even though it was only a few days ago, but it’s not a major thing. We will look day-by-day with him.”

Alex Oxlade-Chamberlain was due to start at the Etihad, but a recent bout of illness meant he was only able to feature from the bench.

Illness was also the reason for Trent Alexander-Arnold‘s absence, but Klopp seems confident both will be fine for Villa, so too Virgil van Dijk, who has now resumed full training after the World Cup.

“Ox is fine,” the manager continued.

“He was ill, like Trent, and some of the staff as well. We have to be careful, like everybody. I think it’s going around.

“That makes planning difficult for the next game. We were 100 percent clear what we wanted to do against City and then you have to change in the last second, pretty much. It’s not cool, but it’s the situation, and that might happen against Villa as well, so we have to stay flexible.

“Virg trained completely normally so will be there. Trent hopefully will be better. He was not part of the full session, but parts. Let’s see how that develops into tomorrow.”

There was also an update on Ibrahima Konate‘s upcoming return, with Klopp revealing the Frenchman’s first training session back will be next Tuesday, December 27.

That, of course, means he will miss out against Villa, but may be in with a chance of featuring against Leicester on December 30.