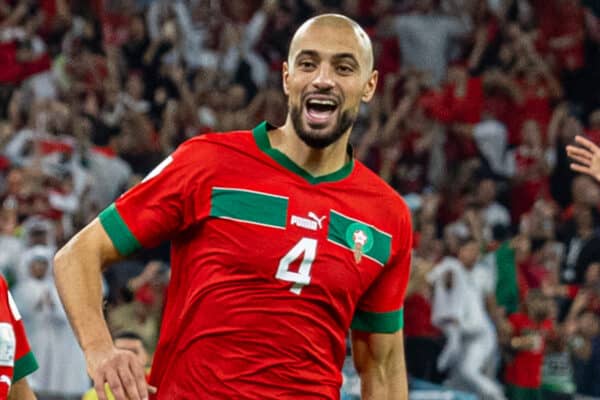 Amid speculation over a move for Fiorentina midfielder Sofyan Amrabat, a Moroccan journalist has brought claims of a new meeting with Jurgen Klopp.

Amrabat has emerged as a convincing candidate as Liverpool weigh up a possible mid-season addition to their midfield ranks, strengthened by his performances at the World Cup.

A key cog in the Morocco side that has reached the semi-finals, where they will take on France on Wednesday evening, the 26-year-old has been touted with a January move.

The Athletic‘s David Ornstein has played down suggestions, however, claiming Fiorentina “want to keep [Amrabat] until the summer.”

“The likelihood of bids arriving next month of a level which might convince the Italians to alter their stance is regarded as low,” he explained this week.

“If they do, the expectation is those offers will come from clubs in the lower reaches of the Premier League and would probably be turned down by Amrabat.”

But with the Serie A side seeking a fee ranging from £17.2 million to around £25.8 million, according to various sources, Liverpool could certainly benefit from a deal.

Moroccan journalist Anas Bakhkhar has fuelled speculation in an interview with Empire of the Kop, claiming that, following an initial meeting, more talks are planned between Klopp and Amrabat’s agent after the World Cup.

The first meeting was described as “positive,” with a follow-up scheduled “to see if the interest is the same for Jurgen Klopp.”

Amrabat’s brother, ex-Watford winger Nordin Amrabat, is claimed to have been involved in discussions, with Inter Milan and Tottenham credited with an interest, too.

It is unclear how reliable Bakhkhar is as a source, and there remains a strong chance that Liverpool’s name is being used to generate interest ahead of the January transfer window.

But there is a case to argue that Amrabat would be a worthwhile addition to Klopp’s squad, particularly given the struggles of Fabinho this season and the lack of an established backup.

Stefan Bajcetic started in the No. 6 in last week’s friendly defeat to Lyon and is likely to be retained for the clash with AC Milan on Friday, but he is largely untested in competitive games.

At 18, the Spaniard still needs time to grow and adjust, perhaps with a loan move arranged to secure regular game time, before he is trusted as a senior option.

Beyond that, the likes of Jordan Henderson, James Milner and even Thiago could fill in as the deepest-lying midfielder, but bringing in a player of Amrabat’s standing would arguably be a better course of action.