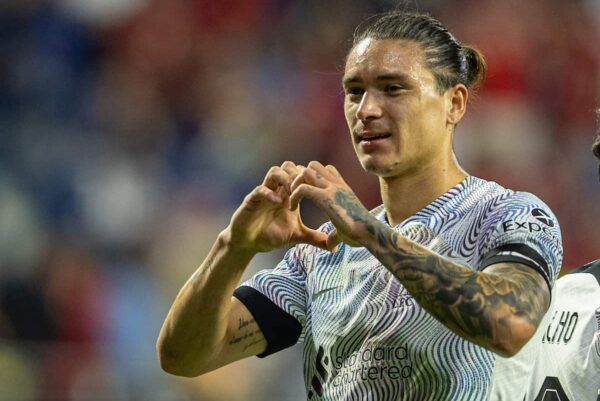 Liverpool’s second match at the Dubai Super Cup saw them run out 4-1 winners over AC Milan, with two youngsters setting up Darwin Nunez for a brace on his return from the World Cup.

Jurgen Klopp might have spoke of mixing up the teams and involving everybody across this short break in Dubai, but it was almost the same line-up for the Reds between games one and two.

The notable change to face AC Milan saw Alex Oxlade-Chamberlain come in on the left, replacing Fabio Carvalho, with Joel Matip again partnering Joe Gomez at the back and a midfield triumvirate of Stefan Bajcetic, Thiago Alcantara and Harvey Elliott – who had clearly overcome injury concerns – staying in place.

Given this consistency, and the fact they’ve had decent minutes across the two games – an hour for most this time out – it’s likely we’ll see a very similar looking line-up when the Reds return to competitive action next week.

The boss has previously used a cup game as the first game back to go full strength so that his players are really cooking for the next meaningful encounter, and that now seems very likely to be the case against Man City in the Carabao Cup.

Add in Caoimhin Kelleher getting two good run-outs and he’s surely set for a first appearance of the campaign in goal.

Nunez back in scoring form

He didn’t have the best World Cup, but back in a Liverpool shirt and back to finding the net.

That’s Nunez, who netted twice off the bench to wrap up the victory – both neat finishes, if not extraordinarily difficult, but it’s the movement more than the shooting which marks out his big ability to provide danger.

The Uruguayan was in excellent form just before heading off to Doha, so it’s pleasing to see that an early exit hasn’t hampered his hunger and spirit when back in domestic action.

Given Diogo Jota remains sidelined and Luis Diaz has had a setback which will leave him out for months longer, Nunez’s own form and fitness is going to be absolutely key to Liverpool’s hopes of getting back towards, and into, the top four.

One of the biggest positives of the trip has to be the way a couple of younger players have really seized their chances.

Bajcetic starting both games was out of necessity as much as anything else, but Klopp could have given someone else the first half – Naby Keita for example – if he didn’t have total trust in the Spaniard.

He could be in line for a prominent squad role across the second half of the season, even after some of the World Cup players return to the squad.

He almost had a goal to go with his assist, and again looking at the paucity in depth in attack right now, he might feel he has some senior competitive action coming his way in the coming weeks.

A return to intensity

Only a friendly and not at full strength for either side, but it was pleasing to see Liverpool maintain the effort and energy levels off the ball for longer this time out.

Against Lyon it started well and faded fast, whereas this time Milan couldn’t ever really cope with the Reds’ physicality and positions of the pitch we wanted to defend from.

Naturally, against City it will have to be lifted levels once again, just to be competitive.

But hopefully this mid-season reset has been exactly what was required for some, to recapture top fitness levels and have a mental break as much as anything else.

The result against City won’t actually matter too much in the grand scheme of the season, but the performance might tell us which way we’re headed.

Klopp has played his hand for now

There may be more changes yet to come at Anfield, given the ownership situation and the constant reports of a January transfer move or two.

But none of that can affect matters for at least the next couple of Premier League games – that’s all down to this squad and the coaching staff.

Klopp will have banked on this mini tournament and trip away from Merseyside as being an exercise in clearing and refocusing minds, quite as much as sharpening up physical traits.

It’s easy to forget on account of the break (and a World Cup full of matches) but the Reds were in a dismal rut earlier in the campaign and we very much needed to break out of that pattern, that aimlessness in matches, that inability to show our best levels.

Integrating three or four returning faces after Qatar aside, this is it now; he’s had his teambuilding time, he’s had an uninterrupted chance to get his tactical approach across once more.

For the sake of the season, let’s hope he and his coaches have got it spot on once more.