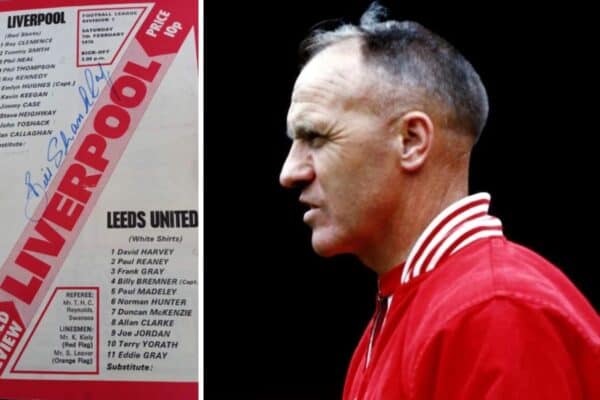 ‘The day I met Bill Shankly in the Main Stand – he was there as a fan!’

Bill Shankly is a legendary figure on Merseyside, the man who set Liverpool on the path to glory. But here we hear a story of him in Anfield’s Main Stand.

Shankly left an indelible mark on Liverpool Football Club and the city of Liverpool.

We all know about his incredible achievements in rebuilding the Reds and launching them on a path to unparalleled glory, but for a generation of supporters whose lives coincided with his, it’s the stories of encounters with the great man that resonate most.

One such story involves a young Keith Williams and his older brother Steve, and a conversation with Shankly as they stood watching Bob Paisley’s Reds together from the Main Stand.

The date was February 7, 1976, and Liverpool were lining up to face Leeds at Anfield.

This was now Paisley’s Liverpool, and after a trophyless first campaign, Bob was about to lead Liverpool to another league title, along with the UEFA Cup.

Shankly had shocked the city in 1974 when he announced his resignation, and was now attending some games at Anfield as a supporter.

As Keith and his brother took their seats, the younger of the two noticed something of a commotion surrounding the gentleman in the seat in front of them.

Keith picks up the story.

“I was a few weeks short of my 11th birthday, and really looking forward to the game against Leeds United. That was a massive game back then,” he tells This Is Anfield.

“I was sat in Main Stand with my elder brother as the players went through their warmup on the pitch.

“Just before kickoff, I noticed this fella stood in front of me but could only see back of his head.

“As the stand began to fill up and supporters started to take their seats, I noticed people started touching this man and hugging him. Being such a young lad, I had no idea what was going on.”

Confused, Keith turned to his brother and asked him what all the fuss was, only to be told: “That’s Shankly. He started all of this, without him we’d be nowhere.”

“I was so nervous, but somehow managed to exchange a few words with him. I can’t really remember what I said, probably something about my favourite player, Kevin Keegan.

“I thought that would be it, but then, to my astonishment, he turned to me at half-time and asked ‘hey, sonny, can I have a look at your programme?’.

“I couldn’t speak. I’d have given him the shirt off my back if he’d have asked for it. I just handed it over and watched as he thumbed through it.

“Then, when he had finished, he turned it over, signed it and just handed it back to me.”

Keith has never forgotten that day, and naturally, the programme is a prized souvenir.

Liverpool beat Leeds 2-0 but, for at least one young Red, the result paled in comparison with the joy of meeting an icon.