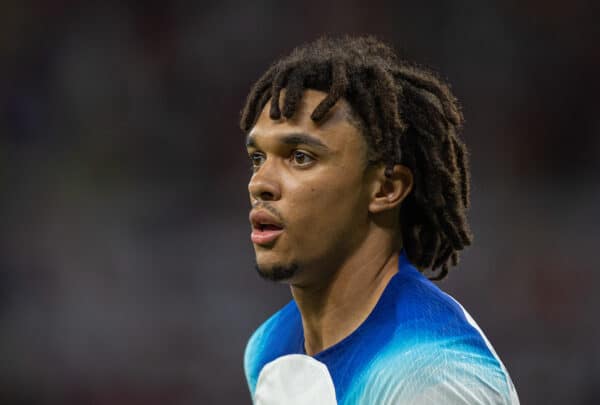 What does Gareth Southgate’s England extension mean for Trent Alexander-Arnold?

Gareth Southgate is staying on as England manager through to Euro 2024, but what does that mean for Trent Alexander-Arnold‘s international career?

After England bowed out of the World Cup at the quarter-final stage, Southgate said he needed time to decide if he was to stay on as manager of the Three Lions.

He needed less than eight days, though, as it was confirmed on Sunday that he will remain at the helm and lead England’s Euro 2024 campaign.

What that means for Alexander-Arnold is likely to be a continued lack of opportunities to impress for his country, having only made 14 starts since making his debut under Southgate in 2018.

Southgate has made a habit of overlooking what is a generational talent in his ranks, a right-back who has won everything at club level and finished 22nd and 19th in the Ballon d’Or – and who is still only 24.

At the World Cup in Qatar, Alexander-Arnold played just 33 minutes and was an unused substitute on four occasions as Southgate instead opted for Kyle Walker and Kieran Trippier.

Incredibly, he mightn’t have even made the plane to Qatar had Chelsea‘s Reece James been passed fit – truly bemusing for all those who witness Alexander-Arnold’s talent on the regular.

The defensive attributions of Liverpool’s No. 66 have been readily cited as his downfall, excessive scrutiny that overlooks all that he offers, with Southgate having previously said Trippier’s “all-round game is ahead” of Alexander-Arnold’s.

“There are stories out there all the time that talk about him and say he’s not a good defender, but that’s not true,” Klopp said of his right-back in September.

“My point of view, it’s an easy pick. Whichever team I would coach in the moment, I would sign him because he is exceptional.”

The same view is obviously not shared by Southgate, despite Klopp having built his side around the creativity and game-changing abilities that Alexander-Arnold possesses.

At Euro 2024, Walker will be 34 years old, Trippier 33 and James 24, with other English right-backs no doubt to emerge, including the likes of Leicester‘s James Justin and Brighton‘s Tariq Lamptey – it’s not a position England are short on.

And from what we’ve seen so far, Southgate isn’t too willing to give the Reds’ No. 66 a chance to stake a claim to the starting spot and who is to say that will change in the coming years?

Alexander-Arnold has a long line of admirers but Southgate is not quite one of those and adding to his 18 England caps over the next couple of years now looks to be another grind for the 24-year-old.

How he isn’t already a regular international starter is beyond us, he must know something Klopp doesn’t…

Hopefully, Southgate will turn the page as Liverpool supporters will be the first to proclaim what Alexander-Arnold can offer a team – though, his lack of international involvement is England’s loss and Liverpool’s gain.