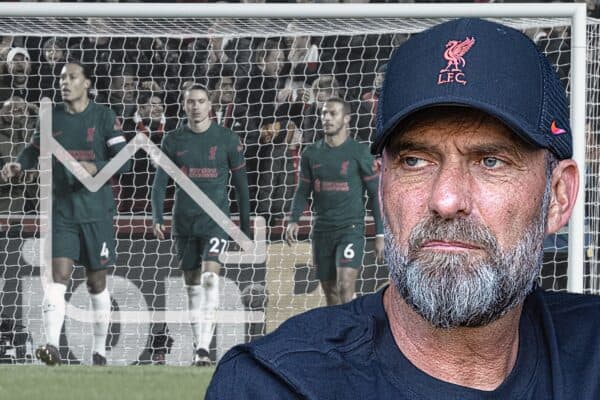 8 worrying facts that sum up Liverpool’s issues this season

Liverpool’s woes have grown tenfold this season, a snowball effect that has Jurgen Klopp‘s side needing to fight their way out of a rut and put the worrying trends and stats behind them.

The microscope is firmly on Liverpool, how has the drop-off been this quick and what will still be on the cards by the time they turn it around? Just two of a long list of questions.

A lack of investment, seasons under Klopp catching up, injuries and inability to control matches with the ruthlessness that took this team to the top, there’s more than one issue at hand.

You trust this side to come out of the other side at some point but there’s plenty to remedy to get to that point and here we look at some of the worrying facts that sum up the Reds’ current issues.

From the 15 games when Liverpool have conceded first, eight have ended in defeat, four in a draw and just three in a victory.

Midfield prime – where is it?

In the age bracket of 22-28, Liverpool have just one midfielder that can tick that box, Naby Keita.

He has played just 164 minutes this season, leaving Liverpool well behind the Premier League trend for midfielders in their prime.

Injuries, and lots of them

The witch is back in the building with 22 senior players having missed at least one game due to injury this season, only Adrian, Joe Gomez, Nat Phillips, Fabinho, Harvey Elliott and Mohamed Salah have avoided a similar fate.

Liverpool’s ranking fluctuates with each passing Premier League fixture but there is a clear decline when it comes to possession won in the final third.

The Reds were the league’s top-ranked team in this stat last season but are currently ranked eighth, dropping from an average of 7.6 per match last season to 4.8.

Without an effective press, Liverpool are vulnerable.

Frailties on the road

Just eight points from nine away games in the league for the Reds, the 13th-worst return in the top flight – not to mention a minus-five goal difference.

Liverpool’s defensive frailties have only added pressure on the forwards to take their chances, but after 18 games the Reds have missed the most ‘big chances’ in the Premier League.

Newcastle are second in the table with 34, ten less than Klopp’s side.

This stat was from after 17 league games and at that point, Klopp’s men had conceded 51 big chances which was more than twice as many as Arsenal, Man City, Newcastle, Man United and Tottenham.

It’s no wonder Liverpool have not been able to keep consistent clean sheets, just eight in 28 matches across all competitions.

On the older side

Now, age does not result in a complete write-off, far from it, but Liverpool continually to be overreliant on their older statesmen and this can go hand in hand with the drop off in intensity we’ve seen.

Klopp’s current first-choice midfield three of Jordan Henderson, Fabinho and Thiago have an average age of 30.6 and as noted above, Liverpool lack midfielders in their prime. It all goes hand in hand.