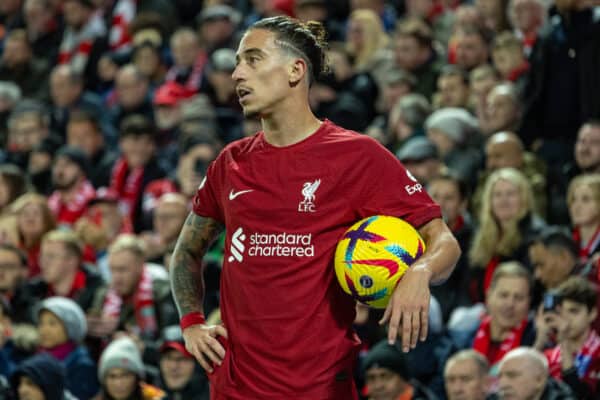 Confirmed Liverpool lineup vs. Brentford: 3 changes but no Gakpo

Liverpool kick off at Brentford this evening for their first game of 2023, with Jurgen Klopp making three changes to his lineup for the Premier League tie.

The Reds finished the year with a lucky 2-1 victory over Leicester, extending their run of league wins to four and edging closer to the Champions League spots.

With both Tottenham and Chelsea dropping points on New Year’s Day, this evening’s clash serves as a big opportunity to gain an advantage on their rivals.

Klopp has made three changes for the trip to west London, but Cody Gakpo is not part of the squad having yet to receive his clearance.

Fabinho returns to the side following the birth of his son, and is joined by Harvey Elliott and Thiago in midfield.

Caoimhin Kelleher and Curtis Jones make their return to the substitutes’ bench, but there is no Jordan Henderson due to concussion, while Roberto Firmino and James Milner were not passed fit.

It is a stronger bench on the whole, though, with Klopp able to omit the inexperienced due of Bobby Clark and Ben Doak.