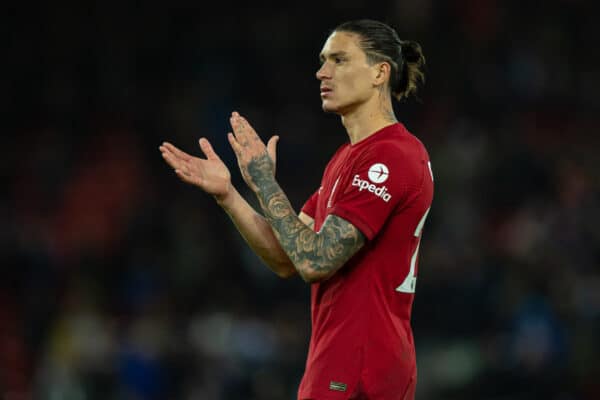 Jurgen Klopp is hopeful that Darwin Nunez will be fit to start when Liverpool host Chelsea in the Premier League, having now missed the last two games.

Nunez has been sidelined since this time last week after suffering a minor hamstring injury, which has seen Cody Gakpo deployed up front in his absence.

The Dutchman has struggled to adjust to a different role, as a natural left winger, while Klopp has been required to shuffle his fringe players for the wide positions alongside Mohamed Salah.

Fortunately, Harvey Elliott stepped up with the winner against Wolves on Tuesday night, ensuring a trip to Brighton in the FA Cup fourth round.

And speaking after the 1-0 victory at Molineux, Klopp revealed his “hope” that Nunez will be available when Chelsea arrive at Anfield for Saturday lunchtime.

“I hope that Darwin is coming back in training tomorrow or Thursday, so might be then in contention, of course,” he explained.

Before the third-round replay, however, the manager admitted that “not all players who played the last game are available now, for different reasons.”

It is likely that knocks were sustained in the 3-0 defeat to Brighton days previous, and it was perhaps telling that Trent Alexander-Arnold and Jordan Henderson were not part of the squad in midweek.

Roberto Firmino and Virgil van Dijk remain sidelined along with Luis Diaz, Diogo Jota and Arthur, and Calvin Ramsay has not been in a matchday squad since the Carabao Cup loss to Man City on December 22.

So Klopp could still have a long injury list to consider, as he also said that “Kosty [Tsimikas] got a knock in the back” at Wolves, while Stefan Bajcetic was forced off with cramp.

The 55-year-old will face a big decision when it comes to his starting lineup either way, with the likes of Bajcetic, Naby Keita and Joe Gomez impressing on Tuesday.

It could be tempting to keep underperforming starters such as Fabinho and Joel Matip out of the side, but Klopp was reluctant to commit.

“I don’t think it would be now right after one game to say ‘OK now that’s the team for the next eight weeks’,” he said.

Klopp did add, though: “But of course, the door is open for everybody. We have to fight, whoever’s ready to fight has a good chance to play.”