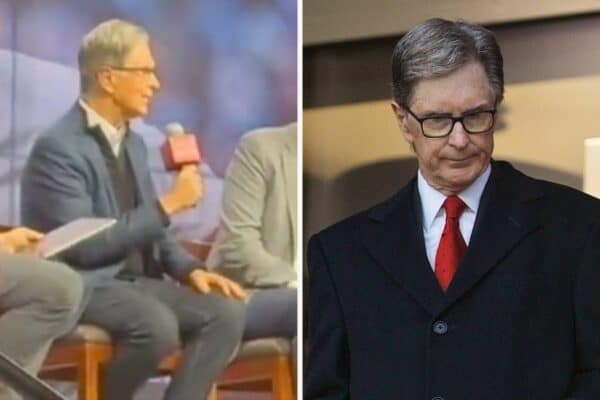 John Henry appeared to speak in front of Boston Red Sox supporters for the first time in almost three years on Friday, and his comments were met with a chorus of boos.

Many fans of the Red Sox, Henry’s baseball team, have become frustrated by a lack of investment compared to their MLB rivals, as well as extortionate ticket prices.

The Fenway Sports Group principal appeared on stage at their Winter Weekend event in Springfield, Massachusetts, an event that gives fans the opportunity to interact with the team.

It was Henry’s first public appearance in front of supporters since February 2020, and when asked to address the concerns of the fanbase, his answer was immediately met with boos.

“I think the most informed thing I can say is that it’s expensive to have baseball players,” Henry said, before boos rang out from the watching crowd.

John Henry has made an appearance at Winter Weekend ? (via @bclouse) pic.twitter.com/w5lEKkYiro

“What has enabled us over the years to be able to be able to spend with the Yankees and the Dodgers is your support, and that support is through ticket prices.”

For Liverpool, of course, tickets and matchday revenue is a much smaller income stream than broadcast and sponsorship deals.

“I think it’s important to say that over the years, we’ve given everything that we can give to this franchise, he continued.

“We live and die every game.

“Look, I’ve had my share of disappointment, we’ve had quite a few. Often, those years have been a disappointment because we’ve been focused on what came next.

“You have to make decisions. You have to let players go sometimes. That’s very, very tough. It’s the worst part of this game, it really sucks.

FSG are, of course, currently exploring the possibility of selling Liverpool, but recent reports continue to suggest that a partial sale is now most likely.