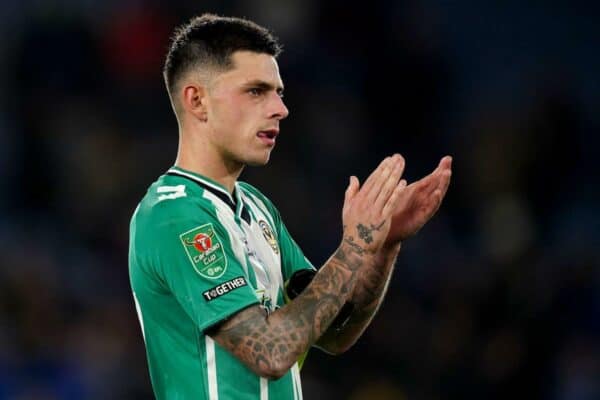 It was a largely quiet weekend for Liverpool’s loanees, with nine not in action and one recalled, but there was a landmark goal for left-back Adam Lewis.

Lewis, who was once close to a first-team breakthrough under Jurgen Klopp, has become a forgotten man among the 16 players out on loan this season.

Now 23, the versatile Scouser is out of contract at the end of the campaign and is settling into a regular role with his fourth loan club, Newport County.

Saturday brought his first goal for the League Two club, and his first since netting for Plymouth in a 2-1 win over Sunderland in January 2021.

Almost two years later, a stroke of fortune brought the second goal of his professional career, with a free-kick closer to the touchline than the edge of the box evading every player and going straight in.

It was not the most glamorous of goals, but it earned Newport a point as it cancelled out Devante Rodney’s opener in a 1-1 draw at Rochdale.

There was a positive result for Conor Bradley and Owen Beck at Bolton, who both featured as the promotion-chasers held League One leaders Plymouth to a 0-0 draw.

Bradley played the full 90 minutes in a tireless display on the right, while Beck came on for the final quarter-hour and produced two key passes – only midfielder Aaron Morley (three) made more.

In Scotland, Leighton Clarkson moved on from false claims he could be on his way back to Liverpool as Aberdeen beat St Johnstone 2-0.

Max Woltman came off the bench as Doncaster lost 1-0 to Leyton Orient, while Jack Bearne lasted 61 minutes in Kidderminster’s 0-0 draw with Leamington.

Over in the FA Cup, there was success for two Liverpool players but disappointment for another – though, out of three loanees involved with their clubs, only one made it onto the pitch and that being for just two minutes.

That was Tyler Morton, who came on in the closing stages of Blackburn’s 1-0 victory over Norwich, with Rovers now set to play Forest Green Rovers or Birmingham.

Rhys Williams also progresses to the fourth round as Blackpool shocked Nottingham Forest with a 4-1 win and will now head to Southampton, but Vitezslav Jaros and Stockport were knocked out by Walsall.

Like Williams and Jaros, Anderson Arroyo was an unused substitute as Alaves beat Burgos 1-0 to move to fourth in the Spanish Segunda Division.

Sepp van den Berg, Marcelo Pitaluga, Paul Glatzel and Fidel O’Rourke all missed out due to injury, while Billy Koumetio‘s early return to Liverpool was confirmed on Thursday.

Jakub Ojrzynski could be set to follow the Frenchman, having been left out of the Radomiak Radom squad for a training camp in Turkey, with their loanee, Albert Posiadala, recalled to take his place.