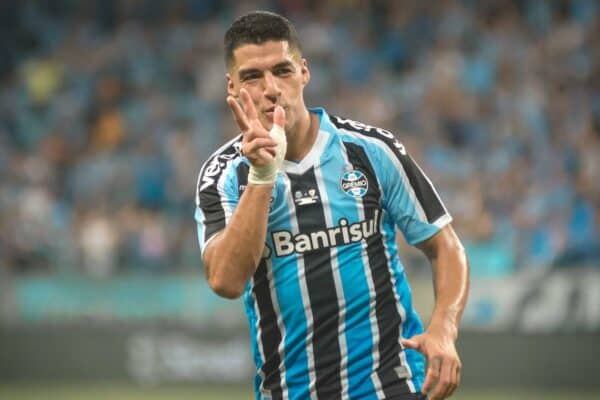 It was a dream debut for Luis Suarez as he began life in Brazil with a hat-trick and a trophy, while Lucas Leiva watched on, still unable to take part.

Suarez signed for the seventh club of his storied senior career in December, as he agreed a two-year contract to join Brazilian side Gremio.

It meant a reunion with former Liverpool team-mate Lucas, though the midfielder is currently out of action after discovering a heart problem during pre-season medical tests.

That left Lucas to watch on from the sidelines as Gremio took on Sao Luiz in the Recopa Gaucha on Tuesday night, with Suarez making his debut.

The Recopa Gaucha is the Brazilian equivalent of the Community Shield, with Gremio’s opponents coming from the fourth tier, after Sao Luiz’s victory over Passo Fundo in November.

Given the gulf between the two sides it was perhaps no surprise that Suarez enjoyed a stunning start to his life on the pitch with Gremio.

The Uruguayan netted his first goal for the Porto Alegre outfit in only the fifth minute, benefiting from some woeful defending the lift the ball over the ‘keeper for 1-0.

Sao Luiz then equalised through Paulinho Santos, only for Bitello to restore the lead for Gremio and then two more from Suarez to clinch the victory.

His second saw him comfortably drive into space between the two centre-backs before slotting the finish home, while his third was a well-taken volley at the near post.

It was far from the most accomplished hat-trick of Suarez’s career – sorry, John Ruddy – but it marked a brilliant start to life at his new club.

Lucas was present at the Arena do Gremio, and speaking after the game hailed his new team-mate as a “winning player,” insisting that he “had no doubt that he would arrive and make a difference.”

Discussing his own future as a player, the 36-year-old revealed that he still has hope that he can return to the field despite his heart issue.

“Doctors asked for two to three months to stop. Afterwards, we have to calmly retake the exams,” he is quoted by Zona Mista.

“I have great hope to get back to normal and play. I never had a symptom, this is very positive. I was taken by surprise.

“I’m not used to not playing. But I’m trying to look at the present.

“I’ve been going to CT, on the weekends I’ve been enjoying [time with] the family, trying to look on the bright side in this forced stop.”