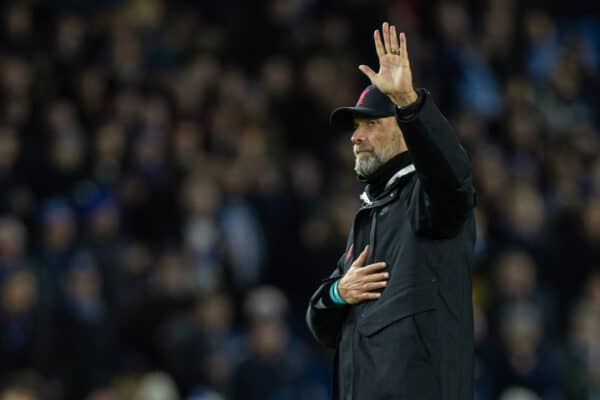 The sight of Jurgen Klopp with his hands clasped and head bowed toward the travelling Kop was widely circulated after Saturday’s defeat, lending to comments aplenty about the manager.

The German has transformed the club since arriving in 2015 and restored Liverpool’s place at the top of English and European football, but this season makes it feel like a long time ago.

In actual fact, less than a year ago the Reds were making their charge toward an unprecedented quadruple, efforts that have, in hindsight, squeezed the life out of Klopp’s squad.

Without a steady turnover throughout the squad to keep the side fresh and capable of deploying Klopp’s high-intensity style, we’ve now been left playing in slow motion.

There are countless reasons to point to for Liverpool’s swift fall back down to earth, and after defeat at Brighton they were all well-discussed, including the lack of investment in the team.

But as for Klopp’s role, two points made themselves abundantly clear across social media: one being that the manager cannot escape blame for this malaise, and the other that you’d sell however many players before you ever let him leave.

There’s plenty of trust in Klopp to right the ship but many accept he cannot escape blame or criticism:

The lack of investment is the biggest problem. Klopp’s attitude & seemingly unwavering loyalty to an ageing squad is definitely another one.

He’s got so much in the bank. He’d have to do so much worse to get sacked or even be in a conversation for it. But he must be questioned.

Jurgen Klopp is by a considerable distance the best things that happened to Liverpool in my lifetime, but that doesn't mean he isn't due criticism. It's through gritted teeth, but he does. I trust him to adapt, but there's been no signs yet

There’s a fella who’s never been allowed to be blamed for anything that needs some blame for the state of this today, sorry.

Let me be clear, I’d run into brick walls for Jürgen Klopp. Yet I can’t pretend that us doing the same thing over & over again isn’t a concern. Of course recruitment is on the owners, but the manager isn’t tweaking things to get the best out of what he’s actually got.

Jurgen imo is still the best thing at our club. Love him. But he needs better support from the club interms of transfers and better advice from staff (or better staff) to see his own blindspots and overcome stubborness. He doesn't need yes men. He needs to find ruthlessness. https://t.co/Q6d8iopFEV

Klopp's loyalty to his players was a massive strength during the years they won every game as it worked both ways. Ironically Klopp being loyal to the same players, who are past it now, is costing him. #LFC

What is the biggest weakness of Klopp?

It’s also one of his biggest positives.

But he’s also stubborn, so he can be too loyal to players who clearly aren’t performing, simply because it’s how he is.

He needs to be ruthless in terms of rebuilding. End of the cycle.

A picture is worth a thousand words

The full-time images of Klopp evoked plenty of emotion and thoughts about the manager and his future:

Sad to see, he looks broken ?

He’s worked miracles. No other manager wins what he’s won with FSG’s system. If you turn your back on him now, you’re a joke. He needs the owners to back him so we can rebuild. And a rebuild is necessary, but will take time.

I might just be a weird old bastard, but seeing Klopp at the final whistle makes me want to get behind him and the team more on Tuesday at Wolves and next Saturday lunchtime against Chelsea, because we can't change the owners, we can't buy players, but we can get behind the lads

Klopp so loyal to this lot and this is how they pay him back. Sad.

If a rebuild is required there’s nobody I would trust more than Jurgen Klopp. FSG owe him their full support after what he has achieved for them. The rumoured £3bn valuation is down to him .

I would never want Klopp gone. I'd sell every single player in that squad and let him rebuild from nothing before sacking him.

But he's not infallible. And he's made a lot of mistakes lately. Especially backing some of our shite players and not calling out the lack of funds.

You back the manager because of what he’s done. You can also be disappointed with him and sympathise with him at the same time.

This is not entirely new territory for Klopp having seen his Mainz and Borussia Dortmund sides succumb to similar trajectories after a prolonged period of time.

He needs to find the ruthlessness to transform the squad, tactically and with the personnel he currently has if no further transfers are to be made this month, there’s no other choice.

Klopp has plenty of credit accumulated and you feel he’d walk before he ever got pushed, but we’re far from that moment. 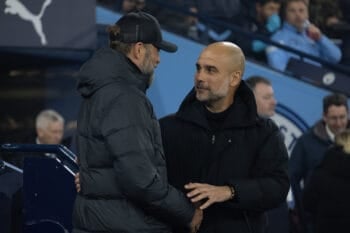 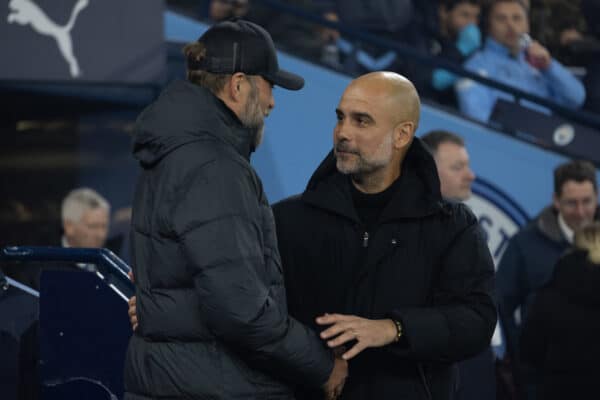