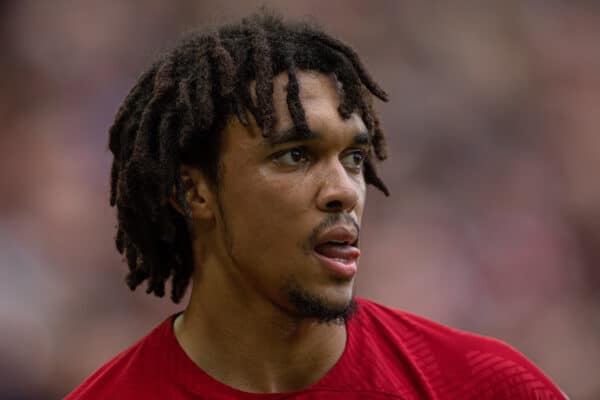 Trent Alexander-Arnold notched his second assist of the season in the 2-2 draw at Wolves, his 63rd for Liverpool in a milestone 250th appearance for his boyhood club.

“How may I assist you?” The words Alexander-Arnold had for Darwin Nunez upon his arrival and against Wolves, he finally got to do just that.

A sumptuous long ball over the defence finished aplomb by Nunez was the moment of the match for Liverpool, who otherwise struggled to assert themselves on the contest.

Alexander-Arnold was one of the few standouts in his 250th appearance for Liverpool on Saturday, adding to his incredible assist tally that now stands at 63.

At 24, he is already tenth in the club’s all-time assist charts since the stat was recorded after the 1969/70 season and needs just 21 more to displace Ian Rush in fifth.

Based partly on @LFChistory assist data, Alexander-Arnold's 62 assists are the most by a player in his first 250 appearances for #LFC since John Barnes (74).

Moreover, as per Opta’s Michael Reid, Alexander-Arnold has the most assists for Liverpool in the Premier League era after 250 matches, narrowly surpassing Steve McManaman’s 61.

Across the board, it’s also the most since John Barnes amassed 74 in the same number of appearances – not bad company for a right-back to keep!

Alexander-Arnold’s assist return has not proved as prolific so far this season, in part due to the lack of finish on the end of his deliveries, which was, thankfully, not the case on Saturday.

His first assist was notched in November 2016 for Divock Origi, while last season proved his most productive with 18 – six of which were finished off by Diogo Jota.

Still at the tender age of 24, Alexander-Arnold’s potential remains frightening and there’s no doubting his ability to one day catch Sir Kenny Dalglish at the top of Liverpool’s charts with 167 assists.