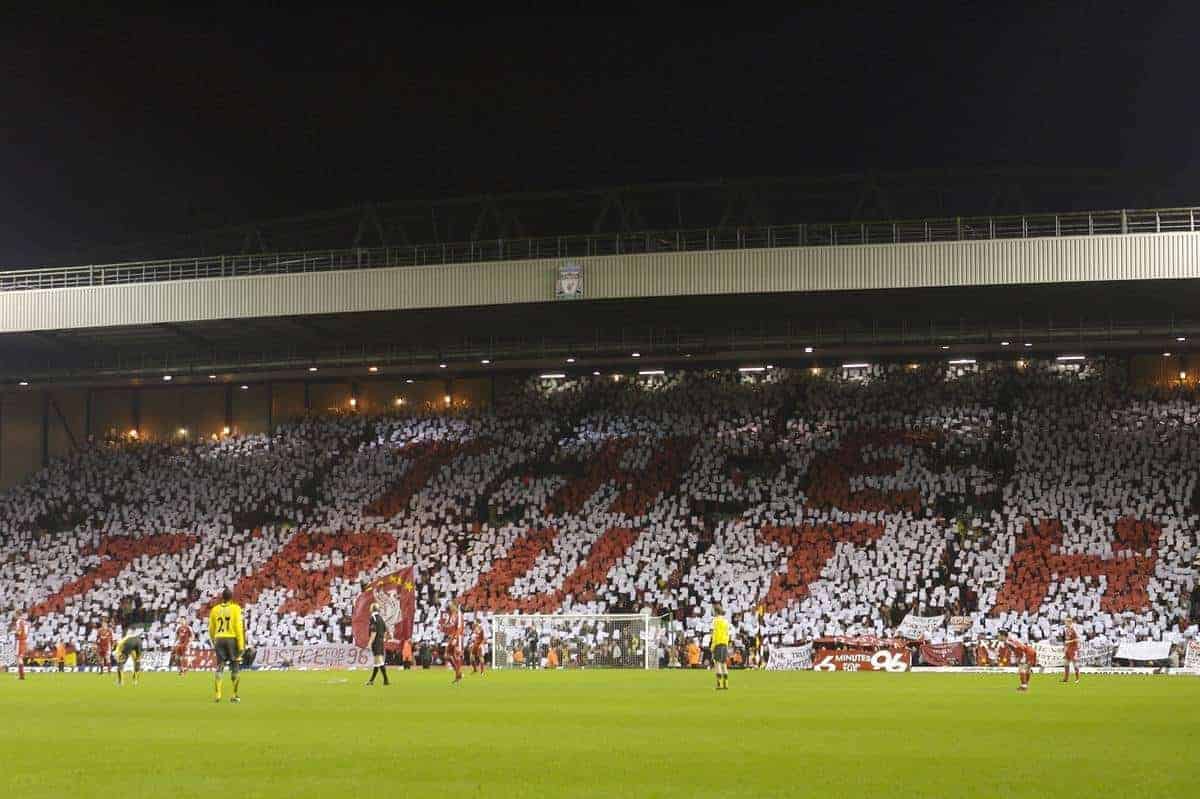 Liverpool fans showed the watching world their immense support, passion and unity in an amazing protest against the former editor of a tabloid newspaper which produced false claims about Liverpool supporters in the aftermath of the Hillsborough disaster in 1989.

The Anfield fans recently began a campaign to ‘Reclaim The Kop’ and educate fans about the club, the fans, history and support. One of the first major issues to address was the boycott of the newspaper which produced the headline ‘The Truth’ but went on to make false and disgraceful claims. The then-editor, Kelvin Mackenzie, recently courted controversy by standing by them claims 17 years later.

So the third round of the world’s biggest Cup competition, the FA Cup, being shown live around the globe, proved the perfect opportunity for RTK and Liverpool fans to put across their amazing protest, with the backing of the club.

Famous for previous mosaics on The Kop, the words The Truth were held aloft alongside the eternal flame – and were left held aloft for the opening 6 minutes of the match, along with continual chanting of ‘Justice for the 96’. 6 minutes being the length of time before the match in 1989 was postponed and 96 being the number of innocent fans crushed to death as a result of inadequate policing.

After the 6 minutes ended a huge wall of noise went around the whole stadium as even visiting Arsenal fans clapped and showed their backing for the protest against Mackenzie. It was an emotional but succesful demonstration of togetherness and support as the world’s media were forced to educate and highlight the Reds fans campaign.

Arsenal striker Thierry Henry, who has previously praised the Liverpool fans for their passionate support, commented after the match: “I’m not sure what the fans were singing at the start of the game but when it stopped the noise they made meant no-one could hear what was going on on the pitch.

“I have such respect for this ground and these supporters. What a place this is to play football.”

The broadsheet newspaper The Guardian’s match report commented: “To say Anfield was noisy at the start of this Cup tie would be the understatement of 2007. The Kop welcomed the television cameras as promised, with a superbly orchestrated protest over slurs on fans’ behaviour at Hillsborough, recently re-aired by Kelvin MacKenzie. He was editor of the Sun at the time of the original accusations.

“The display lasted exactly six minutes into the game – though with grim irony, fans were warned that holding up placards during play would infringe safety regulations – then switched off with military precision, to coincide with the time when the 1989 FA Cup semi-final was abandoned. The protest was replaced by the type of sustained din usually reserved for big European nights.”

After such an emotional and passionate demonstration of support, the result – 3-1 to Arsenal – seemed irrelevant for most Liverpool supporters who were proud to have been part of such a wonderful display.

Further information of the disaster, the protest and the RTK Campaign: