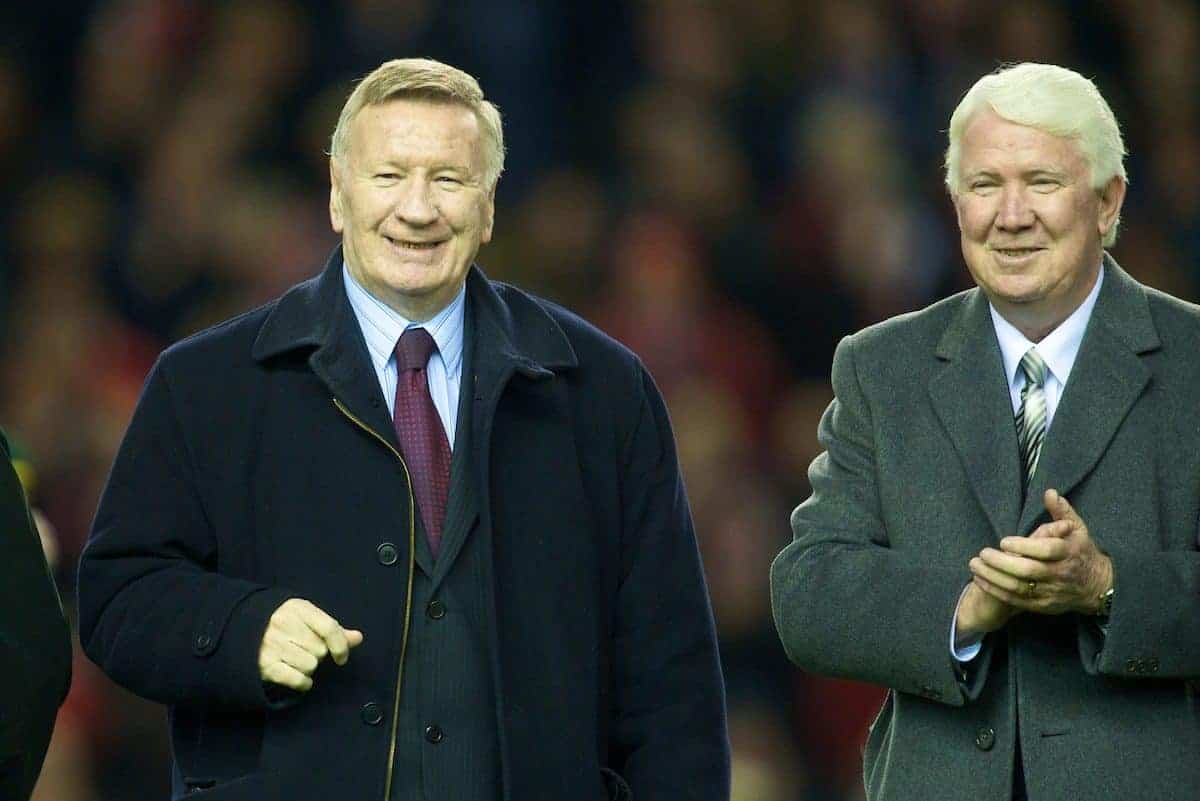 If my primary school headmaster had seen Chris Lawler’s performances for Liverpool in the sixties and early seventies, he would have died of apoplexy at the sight of a defender running forward during a match and having the audacity to score goals.

I can just see my old headmaster now, with his insistence that the only proper formation was 2-3-5, and that the two full-backs should never cross the half-way line. What he would never have understood was that Chris Lawler ‘“ as one of four defenders ‘“ was a pioneer of the overlapping system of play, that allowed full-backs to push forward ahead of midfield players, effectively defending by attacking. It was a remarkably successful tactic for both Lawler and for Liverpool, as he racked up an amazing goal-scoring record of 61 goals in 546 games. That’s a respectable scoring rate of one goal for every eight or nine games, which is still a record for any Liverpool defender, and is especially remarkable when we realise that none of those goals came from penalties. In the 1969-70 season, he was the club’s second highest scorer with ten, and in all European competitions during his Liverpool career he scored eleven times.

Chris was a local lad who came through the ranks of Liverpool’s youth teams. He signed professional forms on his 17th birthday (October 20th) in 1960, but had to wait until March of 1963 before he made his debut against West Bromwich Albion at Anfield. In that entire season, he made only six appearances, initially pairing up in the middle with Captain Ron Yeats. He then made another six appearances the following season, including a three game spell late in the season in place of Yeats, during Liverpool’s run-in to the 1964 championship.

At the start of the 1964-65 season, Ronnie Moran retired and Gerry Byrne switched from right-back to left-back, leaving the right-back’s position vacant; until Lawler took the spot for himself. By the end of that season, he had played in 32 consecutive First Division games, and then played in the FA Cup Final win against Leeds United. At the end of the following season, he had gained a League Champions medal, and a runners-up medal in the Cup Winners Cup which was Liverpool’s first ever European final.

His style of play was plain and simple. There were no tricks or flamboyant moves that would attract attention, just a calm methodical approach to the game that made it look so simple. He was once described as ‘œsauntering through games with all the apparent urgency of a man out walking his dog.’ But, if anyone thought that he was not completely focussed on the job at hand, they soon found out just how dangerous he could be. He had an uncanny knack of calmly taking the ball from a defensive position, playing it forward to start an attack, and then somehow disappearing from view only to reappear in the oppositions’ penalty area and then knocking the ball into the net. That ability of making blind-side runs forward earned him one of his nicknames as ‘œThe Ghost.’ If his style of play on the pitch was quiet and unassuming, it was a fair reflection of his quiet and modest personality off the pitch, which led to him also becoming known by the nickname ‘œThe Silent Knight’.

Many of the goals that Chris Lawler scored were memorable for their importance as they were often the key to Liverpool’s success. The first European Cup Winners Cup match against Juventus was a 1-0 loss in Turin, but was overturned by goals from Lawler and Strong in the second leg at Anfield. That was followed by a pair of goals against Standard LiÃ¨ge. Then, at the quarter final stage against Honved with a 0-0 draw from the first leg in Hungary, Lawler scored one of the two goals at Anfield in the second leg that put Liverpool through to the semi-final against Celtic. Liverpool were back in the European Cup as League Champions from the 1965-66 season, when they were comprehensively beaten by Ajax after a 5-1 loss in the first leg in Amsterdam. It was Lawler who scored the consolation goal in the very last minute of the match, but the deficit was too much to overcome in the second leg and Liverpool were subsequently knocked out.

There were many domestic games where Lawler’s goals were crucial, including one that Everton supporters would rather forget. That was in the derby match at Anfield in November of 1970. Shankly’s new squad looked decidedly shaky with new signing John Toshack looking unconvincing as a striker. As the second half began with the score 0-0, Everton suddenly stormed into a 2-0 lead. That would normally be enough but on this day it wasn’t. Heighway pulled one back in the sixty ninth minute, and Toshack showed his value as he equalised in the seventy sixth minute. Then, as if a script had been written for this game, Lawler pushed forward as the match was nearing its end and knocked in the winner with six minutes left. He broke Evertonian hearts once again two years later when Liverpool thumped them with one from Lawler and one from Emlyn Hughes, after two earlier own-goals, to make it a 4-0 rout.

If anything is more amazing than his scoring prowess it’s his fitness and durability, with him missing only three of 336 League matches over seven seasons. He was always a first choice on Bill Shankly’s team sheet, even when Shankly decided to break up his squad for the 1970-71 season and bring in some new younger players like Heighway, Hall, Lloyd, Clemence, and Evans. Lawler was one of only four senior players from the side to survive the cull and continue with the new squad (the other three were Callaghan, Smith, and Hughes). With this new squad, Lawler picked up a runners-up medal for the 1971 FA Cup Final loss to Arsenal, and then went on to collect more winners medals for League Champions and UEFA Cup winners in 1973, and an FA Cup winners medal in 1974. During that 1972-73 League and UEFA Cup winning season, Chris played in all 66 competitive games that the club were involved in on four fronts.

Not surprisingly he represented England at schoolboy, youth, under 23, and senior levels. What is surprising is that he only received four caps at full international level, including his dream debut in 1971 where he scored a spectacular goal against Malta at Wembley in a 5-0 win.

When Bill Shankly retired in the summer of 1974 it was effectively the end of Chris Lawler’s Liverpool career. Bob Paisley brought in Phil Neal as his replacement, and only selected Lawler for a few games. His final appearance for Liverpool came in September of 1975 against Hibernian in the UEFA cup, after which he moved to Portsmouth the following month (who were under the management of fellow Liverpool retiree Ian St. John). After a couple of seasons on the south coast he moved on to Stockport County, Miami Toros in America, and Bangor City of the Irish League.

One of the most famous stories about Chris Lawler and his quiet nature comes from an incident where Shankly was playing in a five-a-side match and a goal by Shanks was being disputed. Chris was asked to settle the dispute and in his typical short and to-the-point manner simply said, ‘œNo goal, boss.’ Shankly was livid and started yelling, saying to him, ‘œBloody hell Chris! Ye don’t open yer mouth for ten years and now when yer do it’s a bloody lie!’ That and many other stories were told as Chris Lawler became high in demand as an after-dinner speaker. His association with Liverpool continued through the eighties when he was scouting for players and coached the reserve team. In more recent years he has been in semi-retirement coaching young players in the Skelmersdale area.

There’s always going to be debate as to who was Liverpool’s best ever right back. For me, as well as for many Reds, it’s an easy choice. Other players may have earned more medals and gone on to greater glory, but Chris Lawler will always have a special place in our memories as a player who pushed forward so effectively to score more goals than any other defender in the club’s history. In last year’s survey of over 100,000 Liverpool supporters, Chris was chosen as number 51 in the ‘œ100 Players Who Shook the Kop.’ A fitting tribute to a great man and a legendary player.