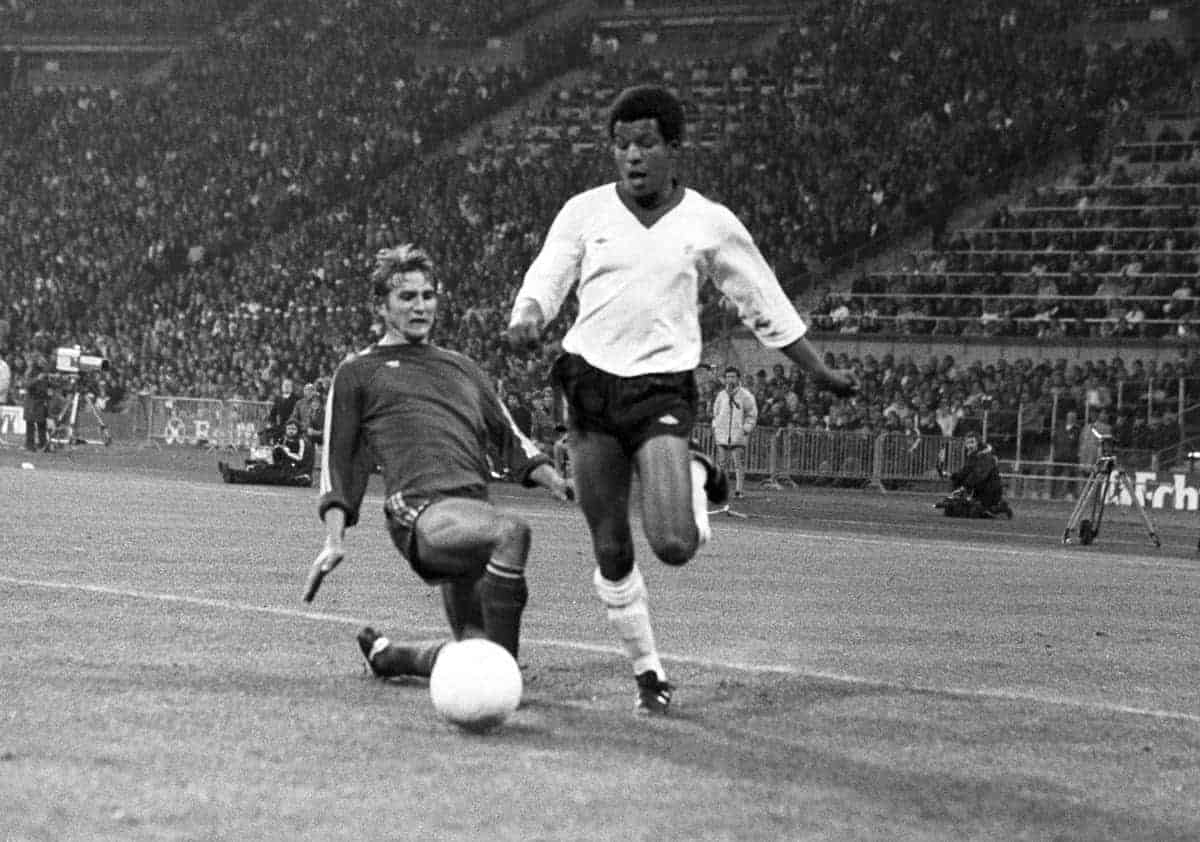 Columnist Keith Perkins begins another look at some of Anfield’s Forgotten Heroes, beginning with Howard Gayle.

During the period of time that Howard Gayle was in the reserve squad, he was playing alongside other Liverpool recruits such as David Fairclough, Sammy Lee, Ronnie Whelan, and Ian Rush. As Howie puts it, ‘œI was elated just to have the feeling, to say that you were a part of Liverpool Football Club. For lads who’ve been brought up here and watched the Liverpool sides through the years, to sign with them is a dream. When you come from Liverpool, you don’t want to be just a footballer, but a footballer who plays for Liverpool or Everton.’

Unfortunately for Howard Gayle, he was not to be accepted as just another Liverpool prospect, but instead as a pioneer for black players trying to break into the professional ranks of formerly white-only clubs. ‘œEverybody made that clear to me,’ recalls Gayle, ‘œIt was constantly in the press that I was the first black player to play for Liverpool. It was a landmark as far as black people were concerned, and I was proud to represent the black community of Liverpool.’

For many people, including some in the Liverpool organisation, that pride of representing the black community went beyond the limits of acceptable behaviour and Howard Gayle was labelled as an activist, a trouble maker, or simply as one who had the wrong attitude which ultimately held back his development. ‘œHowie could have been a great player if he hadn’t had that chip on his shoulder’ was a common sentiment.

Gayle was signed as a winger and it was his blistering pace and close control of the ball that allowed him to speed down the flank past opposing players that set him apart from other Liverpool prospects. It was also his toughness as a player who never shied away from a tackle which earned him the respect of opposing players, and of course of the supporters. His first of only five appearances in a Red shirt came in October of 1980 when he came on as a second-half substitute against Manchester City, replacing David Fairclough. His next appearance came a full six months later, and was the one that will always be remembered. According to then captain Graeme Souness it was Paisley’s ‘œinspired use of the tactical substitution (Gayle)’ that turned a difficult game in Liverpools’ favour.

The Reds had been held to a scoreless draw at home to Bayern Munich in the first leg of the European Cup semi-final. In the second leg, Liverpool were determined to make Munich’s Paul Breitner eat his words whereby he had described Liverpool’s tactics as ‘œunintelligent.’ A raft of injuries caused Paisley to bring in several of his reserve squad for this crucial second leg, which included Gayle on the bench for the start of the match. Kenny Dalglish came off the field after only a few minutes, suffering from the blows inflicted upon him by the German side. Howard Gayle took the field in his place and ran them ragged. As a completely unknown quantity to them, the Bayern Munich side could not contain this player who ran at them with the ball at such high speed, which was totally alien to what they expected as the usual Liverpool style. All they could do was resort to kicking and fouling him repeatedly – to such an extent that Howie was starting to lose his cool and was beginning to retaliate. The rough treatment was too much, and he was booked for lashing out at a Bayern defender. After that booking, roughly an hour after entering the match, Paisley pulled him off the field and replaced him with Jimmy Case who played for the remaining twenty minutes (An additional piece of trivia: Howard Gayle was the first ever Liverpool sub to be subbed.). In the end, a Ray Kennedy goal was enough to put Liverpool through (on away goals) to the final against Real Madrid even though Bayern managed an equaliser just before the end.

That should have been Howard Gayle’s moment of glory, with many commentators and reporters describing him as a rising star and a key player in a gritty and courageous performance by a Liverpool side who were just not willing to lose. But, it left him with a sense of bitter disappointment for having been substituted in the second-half after coming on earlier as a substitute himself. ‘œI was told it was to prevent me from being sent off’, said Gayle. Paisley’s reasoning was that Howard’s repeated retaliation could result in a second booking and a sending off, which would mean that Liverpool would be playing with ten men for the remainder of the ninety minutes, and possibly into extra time. That reasoning may be sound, but it came across as a lack of confidence from the manager.

The following Saturday, Gayle played a full ninety minutes away at Tottenham and scored in a 1-1 draw, playing in a side that included 19-year-old Ian Rush. With David Johnson and Kenny Dalglish out injured, Howie was able to showcase his abilities. As described in one match report (Robert Armstrong in The Guardian), ‘œA few more goals of quality by Gayle, who swept Lee’s pass into the net after 25 minutes, and Johnson may have more than injury to overcome to regain his place. The impressive pace and timing of Gayle’s runs, which bemused Bayern Munich, could well restore a dimension and width to Liverpool’s attack missing since the dropping of Heighway. Significantly, both Gayle and Rush have shown they possess the nerve and flair required for the major occasion.’

The club did not see it that way, and he played in the next game at home to Sunderland and then his last one against Manchester City. At the end of the season, he was offered a contract that was clearly seen as not including him in the club’s future plans, and he asked to be moved elsewhere. A series of loan spells followed with Fulham and Newcastle, then a transfer to Birmingham City in 1983, followed by Sunderland, Dallas Sidekicks, and finally Stoke City, Blackburn Rovers and Halifax Town. In 1984, while at Birmingham, he made three appearances for the England Under-21 national side.

Although he may wish to be remembered for many other aspects of his career, he will always be known as the first black player for Liverpool FC, and for that one night’s performance in Munich. Many more black players came to Liverpool over the years following Howard Gayle; he was in many ways the pioneer who opened the way for others, including John Barnes, to follow later. In spite of his skills, or perhaps because of them, he was often on the receiving end of racial abuse from opposing supporters, especially when playing in the north east. ‘œWhen I played for Newcastle and Sunderland, the fans were great, both on and off the pitch. But when I was an opposition player at St. James’s park, I was spat at, there were monkey noises, and all sorts of racist abuse. It wasn’t pleasant, but sadly it was something I had become used to. From banana skins being thrown at me, to spit in the face at English grounds, to 70,000 Germans at Bayern Munich chanting and making the Nazi salute, it was sometimes horrific.’

For some, his later performances are a vindication of the decision to allow him to leave the club after only five first team appearances. For others, that one night in Munich is seen as a glimpse of what might have been if only he had been given more encouragement, and had a little more faith been shown in him. Following his retirement from football in 1993, he has been involved in coaching and developing local youngsters. He can sometimes be heard on the official Liverpool FC website adding his comments to the live audio broadcasts, which I had the pleasure of listening to just a short time ago.

Howard Gayle’s brief Liverpool career was enough to earn him the number 84 spot in last year’s ‘œ100 Players Who Shook The Kop’.

Quotations for this article were taken from ‘œOut of his Skin’ by Dave Hill, WSC Books, 2001.