ASF continues his fantastic translations of Rafa’s Euro 2008 column from Spanish newspaper El Mundo, here the boss looks ahead to tonight’s semi-final with Russia with the winner facing Germany in the final on Sunday.

Another date with history 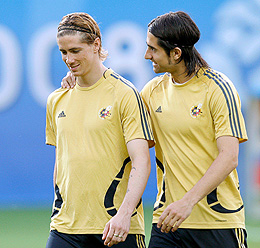 Spain has a new date with history tonight. In the re-match against Russia we are all hoping for the same outcome. That Luis can put on hold all the news about his departure to FenerbahÃ§e, that he can repeat the same team, style of play and result’¦, but also that the players approach the game with the proper mentality, by not being overconfident because of the 4-1 result in their first meeting, and by being ready to face the expected high temperatures in Vienna today.

In front we’ll have a team, Russia, that have gotten stronger as the competition went on and reached the semifinals by their own merits, based on a joyful and offensive style of play and with a better physical condition than their rivals. The fact that the Russian league’s season started not so long ago and that most of their players play in it helps a bit.

From a tactical standpoint, Spain, in order to counteract the Russian’s virtues, must control the game. Spain must dominate possession of the ball, as they’ve been doing so far, so that they run less and also get less tired. The biggest threat is on giving the ball away and the possible counter-attacks by the opposing team ‘“ which they usually manage very well with Yuri Zhirkov on the left flank-, on the creativity and play between the lines of Andrei Arshavin and the work and constant threat of Roman Pavlyuchenko.

The motivation and compromise of the Spaniards offers no doubts. It seems that the entire core have their ideas very clear and they know what they must do at every moment, which makes us optimist ahead of this, I repeat, difficult match. Perhaps, as it usually happens, the strength of the group has been more determinant than a specific player at a given moment. One day it was Villa, another day Torres, last time Casillas’¦ I really liked Marchena against Italy and Senna played at a great level. But we must give Luis his due credit, for knowing how to blend in the efforts of this compact group of players.

And I touch once again on the structure of the calendar. It’s simply demented to repeat matchups between teams that have already faced each other during the group stage. It would’ve been so simple, it seems to me, to cross trajectories and see new matchups during the semifinals.

By the way, speaking of these, history is on our side and, based on it, we should be optimist. In two occasions before today we’ve reached a semifinal of the Euro Cup. The first was with Spain as hosts in 1964. We beat Hungary and then did the same in the final, curiously against Russia.

The second time, the ending wasn’t so positive. It’s true that we beat Denmark in France’84 but we lost against the French the final in Paris. Let’s hope that this third time we don’t fail, not today against Russia nor afterwards in the deciding match.