FOR fans arriving outside the Liverpool Supporters Club on Lower Breck Road more than two hours before kick-off in a crucial Premier League match with arch-rivals Manchester United, it was simple.

Tom Hicks and George Gillett have shown in their nigh on three-years in charge at Anfield that they are more interested in the green of the dollar than the red of Liverpool Football Club.

To them, it’s not a sporting heritage, a club with passionate, loyal fans – it’s an asset, a vehicle to make money. A brand, as Hicks said, “Like Weetabix.”

Broken promises, lies and approaching a manager behind boss Rafa Benitez’s back have long since convinced the thousands on the Spirit of Shankly (SOS) protest march that these two Texan tycoons are not the men to put Liverpool back on their perch.

What amazes the marchers, most signed up to the country’s first football supporters’ union in the shape of SOS, is the 40,000 fans turning up for the game that shrug their shoulders at the off-field soap opera – supporters happy to watch from the stands in the here and now, but seemingly uncaring when it comes to the future of the club.

For 20 years, Liverpool FC has fallen short of where its fans think it should be on the pitch – winning the league. Off the pitch, it’s a similar story. 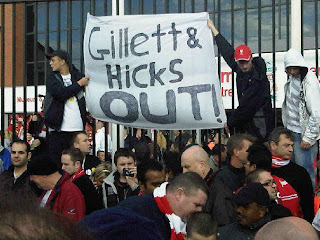 A landlocked stadium, failure to follow the commercial lead of rivals and not capitalising on successes in a marketing sense (notably the 2005 Champions League win) meant Liverpool were struggling to keep up with the financial pacesetters.

So in stepped George Gillett and Tom Hicks – collectively worth over a thousand million pounds when they took over the Anfield reins from David Moores.

They promised a new stadium and new players. They would be, Liverpool fans hoped, the catalyst for a revival.

Back then, at the start of 2007, LFC shareholders were told: “Kop Football Limited (the American pair’s bid vehicle) has indicated that it is committed to an annual budget for player transfers and is able to supplement this should Liverpool’s management and Kop agree additional funds are required.”

The then Liverpool chief executive Rick Parry later said: “It has always been the aim of the club, with the backing of Tom Hicks and George Gillett, to be world class both on and off the pitch.”

How would that be achieved fans wondered? Don’t worry, was the message, it won’t be like the much-maligned Malcolm Glazer and family at Manchester United.

The Independent said in February 2007:

“Gillett is a serious investor with a good track record,” a source in his camp said. Since his 1990s downfall (Well Red: When he was made bankrupt), the American has rebuilt his empire and is estimated to have a personal fortune of £440m.

Gillett has not made public how he intends to pay for his proposed £170m buyout, write off debts of £80m, pay for a £200m new stadium or fund transfers. “But if you’re asking whether this a majorly debt-driven venture, then no,” the source claimed. “It is not a Glazer-type deal.”

Gillett himself added: “We have purchased the club with no debt on the club so, in that regard, it is different [to the Glazers]. We believe in the future of the club, the future of the league, the new TV contracts are outstanding and we are proud to be a part of it.”

The Glazer family borrowed heavily to buy Manchester United and have since heaped £660m of debt liability directly on to United’s books.

Liverpool was £40m in debt when Hicks and Gillett took the reins. Now that debt is approaching £300m.

So in fact, no different to the Glazers. But is the club now world class?

Well, under Rafa Benitez Liverpool have never missed out on Champions League qualification. The one season a top-four finish wasn’t secured, Benitez won the European Cup. So on the pitch, arguably it is. But is that in spite of the owners rather than because of them?

Off  the pitch? Without the promised stadium, Liverpool loses out to the tune of £3million per home game to Manchester United. That’s £100m a season. Or three players of the quality of Fernando Torres – per season.

Players? Undoubtedly money has been spent. It would not be in the interest of the co-owners to completely run down the club. But they’re clearly happy with a top four finish – because the big bucks just haven’t been there.

Gillett claimed: “We’ve spent £128 million on top of what’s come in over the past 18 months to buy players.”

Benitez’s net spend in that time has been around £20m.

Ask yourself, how many times have Liverpool bid in the region of £30m for a genuinely world-class player since Hicks and Gillett have been at the helm?

Under the ownership of Hicks and Gillett, Liverpool is going nowhere fast. It is ticking along, doing OK, while the co-owners wait for the right time to sell up and pocket the profits – their intention from day one.

Yet some so-called fans can’t see it. They don’t get it. They stop, stare and point at protestors. Film it on their mobile phones. But don’t join in.

Maybe all the spin and business talk is too much for some. Well that’s great news for Hicks and Gillett – apathy is their ally.

Or maybe the naysayers are just buying the PR spin.

Maybe they believe the credit crunch has stopped the stadium being built.

And maybe they believe auditors doubting Liverpool FC’s ability to “continue as a going concern” because of soaring interest payments piled on the club by Hicks and Gillett is just “accountancy speak”.

Maybe they think securing a £20m-a-year shirt sponsorship is some kind of genius – rather than an obvious step for a club with a worldwide fanbase of millions of supporters.

Maybe they don’t realise that improving marketing and sponsorship is offset by having to find £30-40m a year to pay interest on the debts Hicks and Gillett created.

Maybe these fans will still ignore the protests and mock from a distance when the club starts to sell star players. Or when transfer budgets – already slim – get further eaten up by interest payments.

Maybe they have forgotten Gillett telling Liverpool: “I don’t think that we come with any plan other than to support him (Benitez) in winning.”

Or what about: “If Rafa said he wanted to buy Snoogy Doogy, we would back him.”

But they won’t back him if he wants to buy Gareth Barry.

They won’t dip into their personal fortunes to improve the defence by signing young, proven quality like Ryan Shawcross or Michael Turner instead of an ageing Greek international.

They don’t care about the club, or the fans. They are not football men. Money, and money alone, gets them out of bed in the morning.

The credit crunch is just a convenient excuse for the lack of action on the stadium. If it isn’t, why did Hicks say the following in January 2008 (five months after the commonly accepted start date for the credit crunch):

“With the refinancing process now done, club supporters can look forward to the timely commencement of construction work on the new stadium and renew their focus on actions on the pitch.”

A month before Parry had told fans:

“The situation in the credit markets has not affected our design, programme, or implementation of building our new stadium. The priority has always been to build a winning team on the pitch and everything else we do is geared towards that.”

And yet now, all of sudden, it is feasible for a project key to the future competitiveness of Liverpool FC, to be dismissed because of the credit crunch without question?

It’s OK though, says Gillett, the club debt situation is “very sound” and “Liverpool is in an extraordinarily good financial position.”

That’s why you are donning a Liverpool tie and jetting all over the world, hawking the club to men with deep pockets, is it George?

Liverpool FC paid £36.5m in interest on their debts in the financial year ending 31 July 2008.

In spite of Liverpool trousering around £20m a season from the Champions League.

In spite of 12 months of increasing turnover and a 60 per cent rise in TV income.

Put simply, if Hicks and Gillett, who have claimed more than £1m in expenses from LFC’s holding company, are the goodies and Spirit of Shankly and like-minded fans are the baddies, why don’t the Americans come out and tell fans what they have got so wrong?

If they laugh at fans’ small mindedness, open-mouthed in disbelief that they are the target for such vitriol, communicate, put us right. Prove to us you are doing a great job.

Some questioned the pre-Manchester United match march as taking away from the support inside the ground for such a crucial game.

Support the team, they said.

That’s exactly what the march is all about – the team, the club, the future. That’s why thousands turned up two hours early to pound the pavements around Anfield.

What would Gillett and Hicks rather have – team success or profit? Well Hicks is also owner of Major League Baseball side Texas Rangers.

And as one fan said on their forum:

Atletico 2-3 Liverpool – As it happened