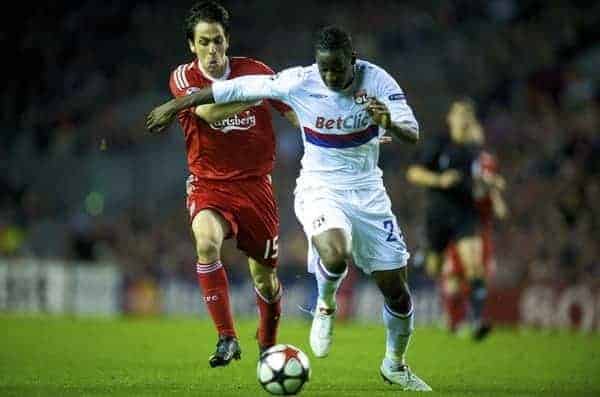 Liverpool look to have completed the signing of Valencia left-back Aly Cissokho on a season-long loan.

The above tweets were posted by Cissokho’s brother, Demba Cissokho, with the message “Proud proud proud of signing for Liverpool FC”.

Cissokho underwent medical on Merseyside today (Monday) after a deal between the Reds and Spanish club was agreed several days ago.

Good to see friend going to play for one of the best club in the world for me .. #AlyCissokho @LFC .. #YNWA

James Pearce of the Liverpool Echo confirmed the full-back had passed his medical and expected an announcement on Tuesday:

Expect loan signing of Cissokho to be announced by #LFC on Tuesday morning. He passed his medical today.

The Mirror says the deal will be signed and sealed on Tuesday:

Cissokho had a medical yesterday on Merseyside and is joining from Valencia for
the season. Brendan Rodgers wants him to provide competition for Jose Enrique at left-back and has the option of making the French defender’s move permanent next summer for £4million.

The 25-year-old will be seen as strong competition in the left-back position for Jose Enrique, who started there in Liverpool’s 1-0 win over Stoke on the opening day of the season.

Cissokho had fallen to third in the pecking order at the Mestalla Stadium, with the La Liga club hoping to make Cissokho’s switch to Merseyside permanent at the end of the loan spell.

Having previously played for Gueugnon, Vitória Setúbal, Porto and Lyon, Cissokho has won one cap for his country, France.

Earlier this year we brought you a full scouting report on Cissokho to bring you a taste of what he could bring to Liverpool:

Aly Cissokho is a powerful French left fullback who is known for his speed, stamina, and, and teeth (more on that one later). He’s physically very similar to Jose Enrique; he’s fast, he’s strong, and he can dribble pretty well for a fullback. Unlike Jose Enrique though, he tends to read the game defensively and intercept rather than simply barging the opposition off the ball, and he doesn’t dabble on the ball when he should pass. His short passing is better than Jose Enrique’s but he’s not likely to thread through that through ball that Jose plays to Suarez.

Cissokho played against Liverpool whilst at Lyon in a Champions League group stage match back in 2009. The French held Rafa Benitez’s Liverpool to a 1-1 draw at the Stade Gerland and beat the Reds 1-2 at Anfield.

Liverpool Football Club are yet to confirm the deal, but are expected to on Tuesday.