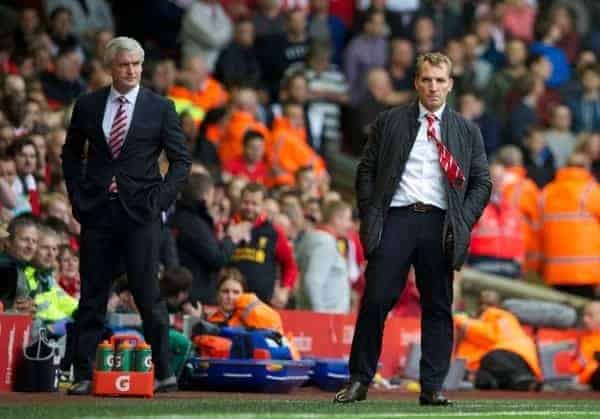 Brendan Rodgers says he has noticed a positive difference in attitudes at Liverpool this season after the Reds got the new league campaign off to a winning start on Saturday. The contrast is stark. On the opening day of the 2012/13 campaign, Rodgers watched on in horror during his first competitive match as Kenny Dalglish‘s successor as his side sunk to a 3-0 defeat away at West Brom.

It wouldn’t be until the sixth game of the season that Rodgers’ Liverpool would record their first victory of the season, including three defeats.

But the up-lifting start of Saturday’s result, coupled with the changing face of Liverpool’s squad has given the Reds and Reds fans much to smile about.

“I remember last year and people saying to me ‘should we be losing 3-0 to West Brom?’ They were absolutely right,” Rodgers told the club’s official website.

“But we’ve got better and better as we’ve gone on. It’s a big job here.

“But I just got the feeling in the dressing room beforehand, when the players were getting together, some of our staff were saying that it just feels different this year.

“There’s a camaraderie and a togetherness there. Long may it continue.

“We haven’t won the World Cup, it’s a game of football. But the lads are happy, they’ve done their job. They knew this was a big three points.”

Liverpool now go to Aston Villa, who sensationally beat Arsenal at the Emirates on the opening day of the season, on Saturday in the 5.35pm kick-off at Villa Park.