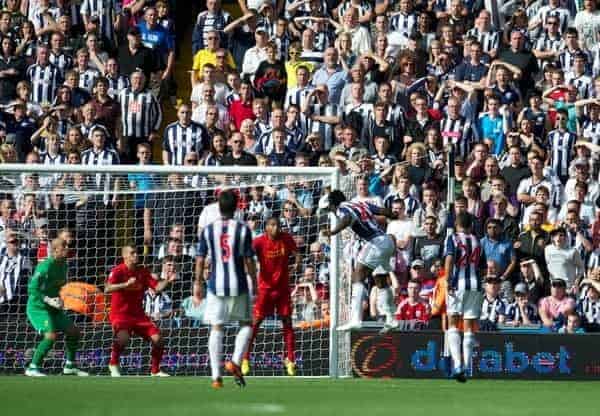 Signs may be positive at Anfield with the new Premier League season about to get underway, but the Reds have shown in recent years, they are not the experts in the perfect start. A disaster of a start to a new season and the reign of Brendan Rodgers, who had recently replaced Kenny Dalglish as manager of Liverpool. Daniel Agger saw red and defensive blunders from Martin Skrtel let in Steve Clarke’s West Brom for a massive opening day victory. Zolton Gera scored a stunner of a goal, Pepe Reina saved a Shane Long penalty, but couldn’t keep out one from Peter Odemwingie and Romelu Lukaku got the third. A day to forget for Liverpool and Rodgers. Luis Suarez was the name on everyone’s lips as he began his first full season for Liverpool since his switch from Ajax in January of that year. After missing a penalty very early on, Suarez netted a header to give the Reds the lead after 13 minutes. But Sebastian Larsson scored a 57th minute volleyed equaliser for the Black Cats on a very frustrating afternoon for the Reds and Kenny Dalglish. Joe Cole had a debut to forget for Roy Hodgson’s Liverpool when he was sent off at Anfield on the stroke of half-time. Until then, the free transfer signing from Chelsea had shown much promise and determination. But his foul on Laurent Koscielny was enough to earn him his marching orders. Despite that, Reds forward David Ngog fired in a very confident opener for Liverpool just minutes after the restart. The Reds looked good for a very important opening day victory. However, a costly error from Pepe Reina right at the death allowed Gunners debutant Marouane Chamakh to claim his first goal for his new club and an injury time equaliser for the hosts.

The year before Liverpool had been picked by the F.A.’s fixtures computer to play away in North London too, this time going down 2-1 at White Hart Lane. Hopes were high after Liverpool’s second place finish and confident challenge for the title the season before. But goals from Benoit Assou-Ekotto and Sebastien Bassong, sealed Liverpool’s fate despite a 56th minute penalty from Steven Gerrard. That Liverpool starting eleven that day included the likes of Ryan Babel, Javier Mascherano and Fernando Torres.

Liverpool’s best Premier League season under Rafa Bentiez began well with a solid 1-0 victory at the Stadium of Light. In a game of little action, it was left to Fernando Torres to hit a screamer of a winner with just seven minutes of the game to go.

Here’s hoping it’ll be a strong start from the Reds come Saturday.

Liverpool vs Stoke City gets underway at 12.45pm at Anfield and is live on BT Sport 1 in the UK.