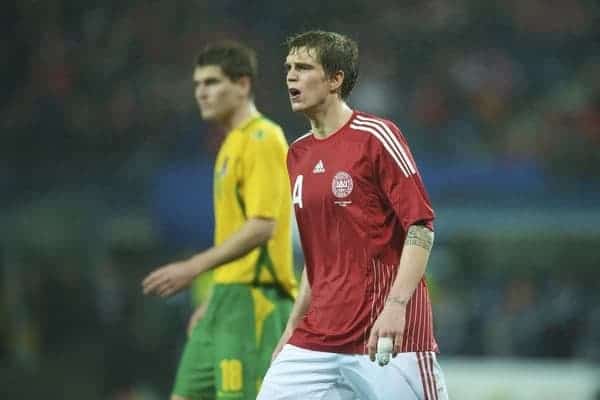 Daniel Agger was on target for Denmark as they opened up their hopes of qualifying for World Cup 2014 with a 1-0 win over Armenia. Agger stepped up to the penalty spot for his country to score the only goal of the game on 73 minutes after Viktor Fischer was brought down in the box.

The Danes are now third in Group B, just one point off Bulgaria in second, with Italy and Malta still left to face in October’s round of qualifying matches.

There wasn’t such great news for fellow centre-back Martin Skrtel, who’s Slovakia side went down 2-1 at home to Bosnia and Herzegovina.

Skrtel captained the Slovakian side, who conceded twice in the second half after taking an early lead.

Skrtel and Slovakia’s hopes of qualifying for the World Cup are now over.

Steven Gerrard captained Roy Hodgson’s England side to a goalless draw with Ukraine, which marginally boosts their chances of World Cup qualification.

Raheem Sterling was an unused substitute in the game, which sees England continue to top Group H going into the final two games. However, there are still four teams in with a shout of qualification in their tight group.

There was good news for Uruguay as Edinson Cavani and Cristian Stuani struck late to help Luis Suarez‘s side take a step closer to qualification. The Reds forward played the full game for the Uruguayans.

Victor Moses did not play in Nigeria’s 4-1 victory over Burkina Faso.

Liverpool’s international contingent now return to Merseyside as preparations get underway for the Reds’ trip to Swansea City on Monday night in the Premier League.